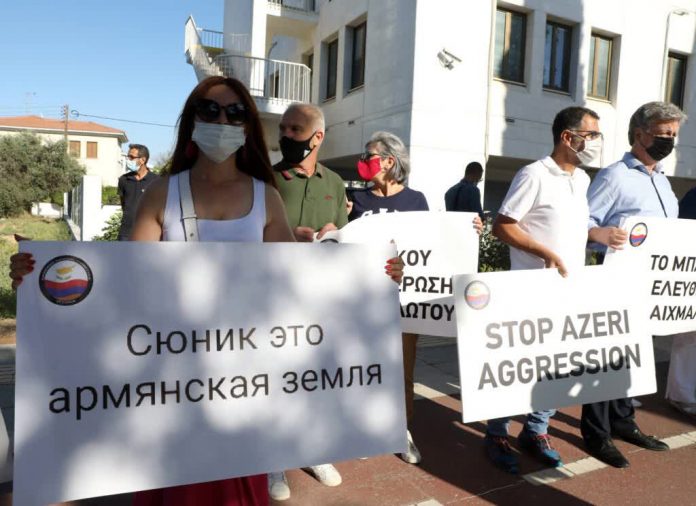 The Armenian National Committee of Cyprus on Wednesday held a protest outside the Russian embassy in Nicosia calling on Moscow to exert pressure on Azerbaijan to release Armenian war prisoners held by the Azeri military, Cyprus-Mail reports.

The group delivered a petition to Russian ambassador to Cyprus, Stanislav Osadchiy.

“The issue of the war prisoners is purely a humanitarian one and therefore there is no place for blackmail and micro-politics,” Hagop Kazanjian, chairman of the Armenian National Committee of Cyprus, told the Cyprus News Agency.

The resolution states that they are protesting the continuing threats and the intervention of Azerbaijan in the sovereign rights of Armenia.

“Armenians around the world feel that Russia’s role as a strategic partner and guarantor of Armenia’s sovereign rights is being challenged,” the resolution added.

“We urge you to continue to put pressure on Turkey and Azerbaijan, whose expansionist aspirations extend from the Aegean, the Eastern Mediterranean and the Middle East to the Caucasus,” said the petition.

The head of the Solidarity Movement, Eleni Theocharous, who participated in the protest, condemned “the new unprovoked offensive action of Baku” and noted that the prisoners should be released under the law of war.

She added that Russia must intervene to defuse the situation and for the release the prisoners based on bilateral agreements.