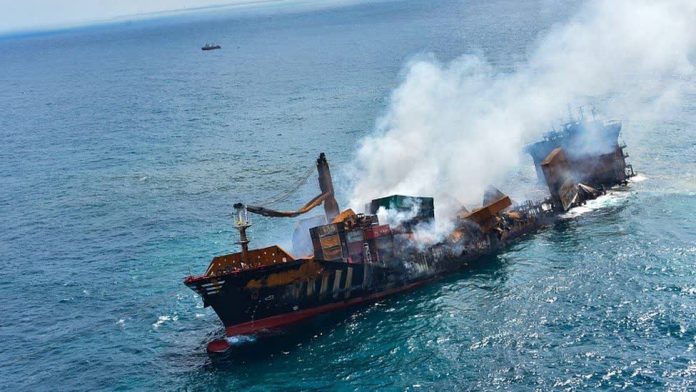 A chemical-laden cargo ship is sinking off the coast of Sri Lanka, sparking fears of an environmental disaster.

The Singapore-registered X-Press Pearl had been on fire for almost two weeks before the blaze was put out this week.

Hundreds of tonnes of oil from fuel tanks could leak into the sea, devastating nearby marine life.

The Sri Lankan and Indian navies had worked jointly over the past days in an attempt to put out the fire and prevent the ship from breaking up and sinking.

But rough seas and monsoonal winds hampered the operation, just outside the port of Colombo.

“Salvors are trying to tow the ship to deep sea before it sinks to minimise the marine pollution, but the rear area of the ship has drifted,” Sri Lanka Navy spokesman Captain Indika Silva told the BBC. The stern appeared to be resting on the seabed.

“With all the dangerous goods, the nitric acid and all these other things, and the oil in the ship, if it’s sinking it will basically destroy the whole bottom of the sea,” she said.

Dr Perera said divers should have been sent down to examine the ship before it was towed out to sea.

“The environmental issues will remain in our waters now,” she added.

The coastal stretch near the city of Negombo – home to some of the country’s most pristine beaches – has already seen oil and debris pollution for days.

Meanwhile, the fisheries ministry said emergency measures were in place to protect the Negombo lagoon and surrounding areas and all fishing from Panadura to Negombo had been suspended.

Joshua Anthony, head of the regional fishing union, warned that the sinking could be “a death blow” for the industry.

“We can’t go to the sea which means we can’t make a living,” he said.

Sri Lankan officials believe the fire was caused by a nitric acid leak which the crew had been aware of since 11 May. The ship was carrying 25 tonnes of the highly corrosive acid, which can be used in the manufacture of fertilisers and explosives.

X-Press Shipping – the Singapore based company that owns the vessel – confirmed the crew had been aware of the leak, but said they were denied permission by both Qatar and India to leave the ship there before the fire broke out.

The fact that Sri Lanka allowed the vessel to enter its waters after it was rejected by two other nations has led to widespread public anger.

Officials have lodged a police complaint against the captain of the ship, who was rescued along with other crew members last week.

Sri Lanka police on Tuesday said they questioned the captain and the engineer of the ship for more than 14 hours.

A court has issued an order preventing the captain, chief engineer and the additional engineer from leaving the country.

The Singapore-flagged container vessel, anchored off Colombo port, first reported a fire on board due to a chemical leak in one of its containers.

The 186m-long (610ft) vessel left the Indian port of Hazira on 15 May carrying 1,486 containers. As well as the nitric acid, the cargo included several other chemicals and cosmetics.