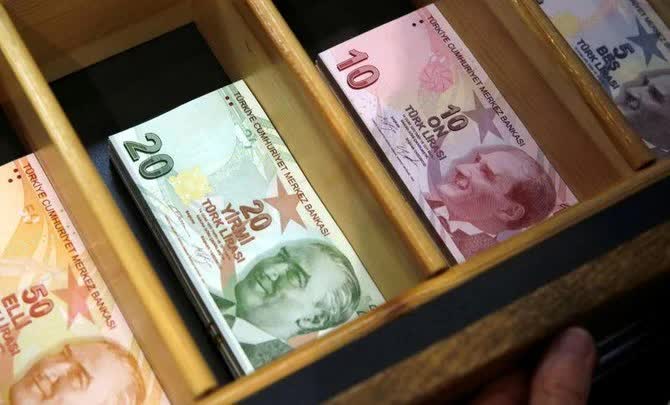 ANKARA: The Turkish lira again slumped to a fresh low early on Wednesday, losing 0.6 percent of its value and hitting a low of 8.88 lira to the US dollar after President Recep Tayyip Erdogan announced his willingness to cut interest rates June 1.

The drop is alarming in a country that already faces significant financial stress due in part to the coronavirus pandemic, with the lira’s credibility damaged and Turkey vulnerable to external shocks.

Raising concerns about the autonomy of the Turkish Central Bank (CBRT), Erdogan, said he had spoken to the newly-appointed CBRT governor about cutting rates. “For that, we will reach July and August thereabouts so that rates can begin to fall,” he said.

Over the last two and half years, Erdogan has replaced four CBRT governors. Naci Agbal, a respected figure and a market-friendly governor, was ousted in March after he hiked interest rates in reaction to global markets. On May 25, Erdogan also removed one of four CBRT deputy governors.

The current governor, Sahap Kavcioglu, has held interest rates stable at 19 percent and has resisted Erdogan’s pressure to lower them.

“We have seen all this before. Investors do not want to see yet another premature rate cut, especially when inflation is stubbornly high, but most would not have been caught by surprise by Erdogan’s comments,” Wolfango Piccoli, co-president of Teneo Intelligence in London, told Arab News.

The sudden change in the exchange rates for the lira, still one of the worst-performing currencies in the emerging markets, has been a direct reaction to the latest remarks from Erdogan, who believes that any cut in rates will decrease producer costs and will push consumer prices down.

On Thursday, Turkish authorities will announce updated inflation data, which is currently at 17 percent.

CBRT authorities held calls with investors and some foreign experts on Wednesday to inject credibility into the economic prospects of the country.

“Erdogan has supported the argument that high rates fuel inflation, even though conventional economic theory says the opposite is true. A succession of central bankers had to deal with this and more often than not had to bend monetary policy to Erdogan’s will,” Piccoli said.

The president’s relentless commentary on interest rates also reflects the institutional degradation that Turkey has been facing for years. The CBRT is one of the main victims of this process, Piccoli said.

According to the latest official statistics, the number of people borrowing from banks has reached 34.5 million, while about 2.3 million people took out loans for the first time this year, especially consumer loans and credit card expenditures, with a significant rise in suicide rates amid financial strain.

Daron Acemoglu, economist at the Massachusetts Institute of Technology (MIT), recently urged the Turkish government to keep its hands off the CBRT and underlined the importance of monetary policy independence.

“It is accepted all over the world that the CBRT needs autonomy. There should not be any monetary policy based on instructions coming from the prime minister or president. When you do this, foreign capital will not come,” Acemoglu said.

He also voiced his concerns over a potential deepening of Turkey’s current economic crisis.

Nikolay Markov, senior economist at Pictet Asset Management in Switzerland, said Erdogan is focused on interest rates because current borrowing costs in the Turkish economy are too high and have started constraining domestic demand, which is one of the key growth pillars.

“The economy definitely needs lower rates for its credit-based model to work properly and to boost GDP growth, which is currently not possible due to the still very high headline and core inflation and elevated inflation expectations,” he told Arab News.

Markov believes that the CBRT is now again committed to delivering price stability, and despite the recent comments from the president, will not cut rates in the very near term, and not until the disinflation process is in place, so not before the summer.

“Kavcioglu is trying to regain some CBRT credibility which was lost after the firing of Gov. Agbal back in March. The implication for investors is still a complicated one because offshore investors are still not convinced of the CBRT’s full commitment to price stability, as they still think the CBRT is dependent on the political pressure coming from the president,” he said.

According to Markov, this will continue to trigger market and lira volatility in the period ahead.

“Nevertheless, I have the impression that Kavcioglu is fundamentally a hawk and that he will try to delay the start of rate cuts as much as possible without offending the president. Overall, I think the earliest possible date for a rate cut is in July. A rate cut in June is off the table,” he said.