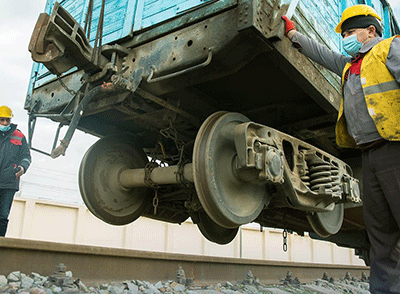 Yerevan said there was no point in discussing new transportation routes with Azerbaijan while there was so much tension along their border. Baku’s response was curiously muted. Post-War Report.

Negotiations for a transit corridor have gotten off-track. (Azerbaijan Railways)

Armenia and Azerbaijan have stopped negotiating over reopening their borders and creating new transportation routes, setting the stage for more potential instability ahead even as on-the-ground tension has slightly abated.

On June 1, Armenia’s deputy prime minister Mher Grigoryan announced that the Armenia-Azerbaijan-Russia trilateral working group on transportation had suspended its work. “As of today the commission’s work isn’t continuing, because effective and successful work requires an appropriate environment,” he told a meeting of parliament. “When the situation on the border is like it is, I don’t think that constructive work is possible in this format. Contacts in this format have stopped, we will see what happens in the future.”

Armenia had always been the least enthusiastic participant in the working group, which was set up on January 9 when Russian President Vladimir Putin hosted Azerbaijan President Ilham Aliyev and Armenian Prime Minister Nikol Pashinyan in Moscow and the three signed an agreement on “unblocking” transportation corridors.

It is the only formal agreement between Armenia and Azerbaijan since the November 10 ceasefire statement that ended last year’s 44-day war, and reflected above all Baku’s top strategic priority: a transportation connection between Azerbaijan’s mainland and its exclave of Nakhchivan through Armenia.

The January 9 agreement set out an aggressive timetable to work out the details of that and other transportation projects (though the Nakhchivan connection was the only one specifically identified): A working group (led by the deputy prime ministers of the three countries) would be formed by January 30, and they would present proposals to their respective leaderships by March 1.

The first benchmark was met: The group held its first meeting on January 30. Two weeks later, they had a videoconference. But little was heard from the group after that; Sputnik Azerbaijan reported that the group had held only four meetings, and the last had been a March 1 videoconference. Meanwhile the main item on the group’s agenda – the Nakhchivan connection – became one of the sore points between the two sides.

The disagreement was expressed terminologically: Aliyev and other Azerbaijani officials have consistently referred to the connection as a “corridor.” Whether intentional or not, the use of the term “corridor” suggests a level of Azerbaijani sovereignty over the route that Yerevan doesn’t want and hadn’t signed up for. In the lexicon of the conflict, it contains an unavoidable echo of the “Lachin corridor,” the strip of land connecting Armenia to its protectorate of Nagorno-Karabakh. Any possible peace deal between the two sides was likely to stipulate Armenia’s usage of that corridor, though the precise nature of who would enjoy control of the road and how was never finally determined. But in the 26 years following the end of the first war, it was Armenia which enjoyed sole (if internationally unrecognized) control over the Lachin corridor.

In the November 10 ceasefire statement, who controls what in the Nakhchivan route is relatively clear: “Armenia shall guarantee the security of transport connections between the western regions of the Republic of Azerbaijan and the Nakhchivan Autonomous Republic in order to arrange unobstructed movement of persons, vehicles and cargo in both directions. The Border Guard Service of the Russian Federal Security Service shall be responsible for overseeing the transport connections. As agreed by the parties, new transport links shall be built to connect the Nakhchivan Autonomous Republic and the western regions of Azerbaijan.”

That is, the territory would remain Armenian but Russian border guards would help ensure Azerbaijan’s free use of it for transportation.

And just as consistently as Azerbaijanis use the term “corridor,” Armenians reject the word. “I assure you that the Armenian side has not discussed and will not discuss ‘corridor logic’ issues,” Grigoryan told reporters on June 1. “If by saying ‘corridor’ some people mean transportation routes, it’s another question, if by saying ‘corridor’ they mean any degree of influence related to sovereignty, I assure you that this is impossible during my discussions.”

Whatever form the Nakhchivan route takes, the sovereignty is going to be complicated, and “corridor” could have a more innocent meaning. And Azerbaijanis have been pointing out that under the new conditions following the signing of the November 10 ceasefire, the Lachin corridor has an analogous situation – Azerbaijani territory that Armenians can use under Russian protection.

Farhad Mammadov, an Azerbaijani analyst, was asked in an interview with RFE/RL why Baku insists on the word. “After all there is something in it that sounds extraterritorial, which obviously alarms Armenia,” said the interviewer, Vadim Dubnov.

“It’s not about extraterritoriality, the issue is that Russian border guards will be providing security,” Mammadov answered. “There is no provision that the corridor will be extraterritorial. The Armenian side also will be able to use it. If there is a Lachin corridor, then there also should be a Zangezur one,” he said, using the name Azerbaijanis use for southern Armenia.

But those subtleties are easily lost amid the other aggressive rhetoric from Baku. Notably, in April Aliyev threatened to “open the corridor by force” if Armenia continued to stall.

Nevertheless, Pashinyan and other officials have been trying to argue – against significant public skepticism – that opening borders and creating new transportation routes would benefit Armenia, as well. But Armenia also has been pushing for an alternative route other than the one Azerbaijan wanted through Meghri. Yerevan’s preference was to restore another Soviet-era railroad, through Ijevan in northern Armenia and Gazakh in Azerbaijan. At the beginning of May, Grigoryan was reportedly preparing to propose that route to the trilateral working group.

But then tensions began to rise sharply between the two sides, starting with an advance by Azerbaijani troops along the southern border with Armenia, into what Armenia claimed was its territory. That led to several other border incidents and the tensest period between the two sides since last year’s war.

The border tension compounded previously existing grievances between the two sides, in particular Azerbaijan’s continued detention of Armenian prisoners of war and other detainees (Armenians have documented nearly 200), as well as Baku’s demand that Armenia hand over maps of the land mines that it appears to have laid in last year’s fighting and which regularly kill Azerbaijanis visiting the region. (Most recently, two journalists for Azerbaijani state media and a local official were killed on June 4 after their vehicle hit a mine in the Kelbajar region.)

It has become impossible to untangle this knot of claims and counterclaims, but one frequent Azerbaijani complaint had been that Armenia was dragging its feet on moving forward with the Nakhchivan route. The process was not very transparent and so it’s difficult to judge from publicly available evidence whether or not Armenia was dragging its feet, or simply not rushing at the speed that Azerbaijan wanted. Aliyev, in February, had already laid the foundation for a railroad in Azerbaijan’s section of the would-be Meghri route.

In any case, the suspension of the trilateral working group is only going to slow the process further. So it’s a bit odd that the reaction from Baku to the news has been muted. There have been some suggestions from Baku, though, that Azerbaijan could respond by shutting down the Lachin corridor. “Armenia is evading its obligations not to the commission, but to the November 10” ceasefire agreement, said Farid Shafiyev, the head of the government-run think tank Center for Analysis of International Relations. “In this case, of course Azerbaijan has the right to drop its obligations – if the corridors that we need aren’t open, then the Lachin corridor will be under question.”

Shafiyev added, though, that Baku would likely wait to respond until after Armenia’s elections, scheduled for June 20, when the Armenian government will likely have more room for maneuver.

Meanwhile, contacts between the two sides are continuing in other formats. Military officials from Armenia and Azerbaijan met with their Russian counterparts in Moscow on June 2 to discuss “de-escalation of the situation on various border regions of Armenia and Azerbaijan. It was agreed to continue working contacts,” a source familiar with the talks told the Russian news agency Tass. Sputnik Armenia reported that the delegations were led by Armenia’s deputy chief of general staff Arshak Karapetyan and the head of the border service Arman Gasparyan, Azerbaijan’s head of external intelligence Orhan Sultanov, and the commander of the Russian peacekeeping mission in Nagorno-Karabakh, Rustan Muradov.