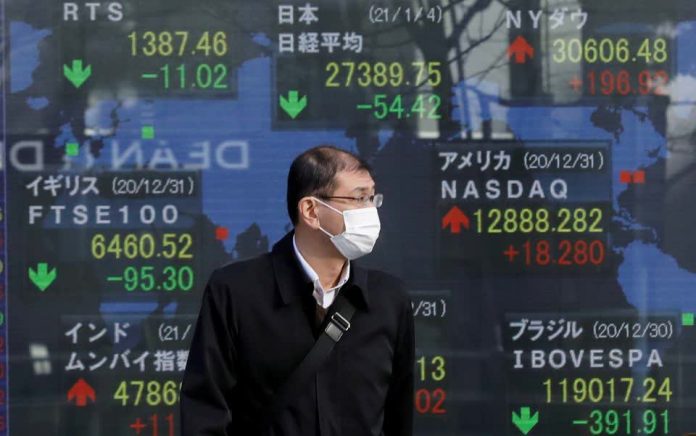 A man wearing a facial mask, following the coronavirus disease (COVID-19) outbreak, stands in front of an electric board showing Nikkei (top in C) and other countries stock index outside a brokerage at a business district in Tokyo, Japan, January 4, 2021. REUTERS/Kim Kyung-Hoon

U.S. Treasury yields jumped, lifting the dollar and hurting tech shares, after better-than-expected employment data overnight raised expectations for a strong reading for nonfarm payrolls on Friday, while a measure of service sector activity climbed to a record high.

U.S. stocks got some relief into the close on reports that President Joe Biden is willing to compromise over a proposed corporate tax hike.

The dollar index held Thursday’s 0.7% rally, its biggest since April, to hover around 90.50.

“U.S. real rates have moved higher – not great for risk or sentiment,” Chris Weston, head of research at brokerage Pepperstone in Melbourne, wrote in a note to clients.

While Fed officials have consistently said they expect current inflationary pressures to be transitory and for ultra-easy monetary policy to stay in place for some time, they are also increasingly touting the need to at least start talking about a tapering of stimulus.

New York Fed President John Williams said on Thursday that the U.S. economy is still far from the point at which the central bank might begin to withdraw its support, although it makes sense for officials to begin discussing their options for adjusting policy.

Fed Chair Jerome Powell speaks on central banks and climate change at a conference later in the global day.

Investors are carefully parsing the economic data to gauge if inflation could prove sticky enough to force the Fed’s hand on tapering.

This month, economists forecast private payrolls likely increased by 600,000 jobs in May, after rising only 218,000 in April.

“I am not even going to try and predict this one, it is a lottery, although the so-called ‘whisper number’ is closer to 790,000.”

Gold remained weaker following a 2% tumble Thursday, its biggest since February, amid a stronger dollar.