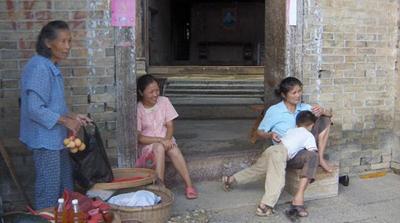 Both the Post and NYT had recent pieces articles on how China is encouraging families to have more babies in order to counter an alleged demographic crisis. The basic story, which has been repeated many times in the U.S., is that China will be seeing a decline in the ratio of workers to retirees, since families have had relatively few children over the last four decades. This is supposed to be really bad news, in fact, a crisis.

In response, China’s government is apparently taking steps to encourage families to have more children. This follows several decades in which it had the opposite policy in place, encouraging families to have just one child.

The crisis story is a bit hard to understand for those of us familiar with arithmetic. Every wealthy country has seen a sharp reduction in the ratio of working age people to retirees. That is something that happens when better living standards and improved health care allow people to live longer. Also, when countries have gotten wealthier, people have chosen to have fewer children.

This rise in the ratio of retirees to working age population has not prevented both working age people and retirees from enjoying higher living standards. This isn’t magic, productivity rises through time as technology improves and workers become better educated. This means that each worker can produce more output in the hours they work.

The graph below projects the number of effective working age people per retiree under various productivity assumptions. The first bar shows the 2020 ratio in China of 3.74 working age people to retiree (people over age 60 for this calculation). This ratio is projected to fall to 1.68 by 2045.

That only looks bad until we factor in productivity growth over the next 25 years. In an extremely pessimistic case, where productivity growth averages just 1.0 percent annually (the lowest sustained rate the U.S. has ever experienced), the ratio of 2020 equivalent workers per retiree would be 2.15. This would mean that the average worker would have to see a decline in their income relative to retiree’s income (i.e. a tax increase), to ensure that retirees have the same income in 2045 as in 2020. This doesn’t imply a decline in workers’ wages, as will be shown shortly.

The next bar assumes a 2.0 percent annual rate of productivity growth over the next 25 years. That is roughly the average in the United States over the post-World War II era. In this case, the decline in the ratio of 2020 equivalent workers is more modest, dropping to 2.76.

In the former case the ratio of 2020 equivalent workers to retirees would be 4.48. In the latter case it would be 7.21. This means that if the goal is to ensure that retirees enjoy the same living standard in 2045 as they did in 2020, this can be easily done without any increase in taxes on the working population.  In fact, if the goal is to just maintain retirees 2020 living standards, tax on workers can be reduced in these high productivity growth scenarios.

If we’re looking at how demographics affect living standards, another way to evaluate the picture is to look at output per person. This calculation picks up directly the impact of a smaller segment of the population working. The graph below shows the story, with the same set of productivity assumptions in the earlier figure.

As can be seen, even in the very low productivity growth scenario, output per person would be slightly higher in 2045 than in 2020. That means that it should be possible to structure distribution so that everyone can see an improvement in living standards over this period, albeit a very small one.

If China’s productivity growth over the next quarter century matches the U.S. post-World War II average, then incomes will be more than 30 percent higher in 2045 than they were in 2020. That would allow for substantial improvements in living standards for both workers and retirees.

In short, even modest rates of productivity growth will easily offset the impact of a declining ratio of workers to retirees that China is expecting over the next quarter century. If the country can sustain productivity growth rates anywhere near what it has been seeing, the impact of the drop in the ratio of workers to retirees will be trivial in comparison.

There are four major reasons why changing demographics pose even less of a problem than indicated in the discussion above. The first has to do with more accurately calculating the ratio of workers to retirees. I was deliberately sloppy about what we were measuring in using working age people to retirees (people over age 60). Many people, generally women, between the ages of 20 and 60 are not in the paid labor force. If the share of women in the paid labor force increases over the next quarter century, then the drop in the ratio of workers to retirees will be smaller than indicated in the calculations above.

There is a similar story on the over 60 part of the calculation. As the country gets richer and the workforce is better educated and healthier, a larger share of the population over age 60 is likely to continue working. This is both because jobs will be less physically demanding on average and also because better educated people are more likely to have jobs they find inherently rewarding. In the United States in 2019, before the pandemic, 56.0 percent of the people between the ages of 60 and 64 were employed. Of people between the ages of 65 and 69, 33. 3 percent were employed on average. Insofar as a substantial segment of this older group in employed, it both raises the number of workers and reduces the number of retirees who need to be supported by the work of others.

The third issue is the pollution and crowding that would result from efforts to increase the population. These negatives are not picked up in measures of GDP, and there is good reason to believe they are substantial. China has done much to clean up its air and water in the last two decades, but many areas still have severe problems. Other things equal, more people consuming more energy and material items, means greater problems with pollution. This can be offset with increased efforts at containing pollution, but these efforts carry a substantial cost.

The problem of more people goes well beyond what we just think of as pollution. More people means more traffic congestion. People will have to live further from work, which means longer distance commutes. Public infrastructure will see more wear and tear and everything from parks and museums to beaches and sporting events will be more crowded. These costs are picked up at best imperfectly in GDP measures, and in many cases, not at all. This means that if China’s solution to its declining ratio of workers to retirees is to have more children, it may be making matters worse for its population a quarter century into the future.

This brings up the final point, which everyone should have guessed by now. Children are also dependents. If our plan for reducing the ratio of workers to retirees is to have more children, that provides zero help at all for the next two decades, and only modest help in the following decade or so.

Meanwhile, the ratio of dependent children to workers will have risen substantially. It will take a very very long time for an increase in fertility rates to lead to fall in overall dependency ratios.[1] In the case of the United States, the total dependency ratio (both young people and older people relative to working age population) was 0.681 in 1945, at end of World War II. Then we had the baby boom, which led to a sharp increase in the ratio of young dependents to working age people.

We did not see the ratio of total dependents to working age population fall back below its 1945 until after 2000, more than 55 years later. We know that China’s leaders are often praised for having a longer- term view, but in this case we are not talking about planning for 2045, but rather 2075.

The long and short is that China does not face a demographic crisis, contrary to what you read in the paper, and encouraging people to have more children is not a good solution.

[1] We can argue about the resource needs of children relative to retirees. For purposes of this discussion, let’s just say they are close.

This first appeared on Dean Baker’s Beat the Press blog.

Dean Baker is the co-director of the Center for Economic and Policy Research (CEPR). He is the author of Plunder and Blunder: The Rise and Fall of the Bubble Economy.