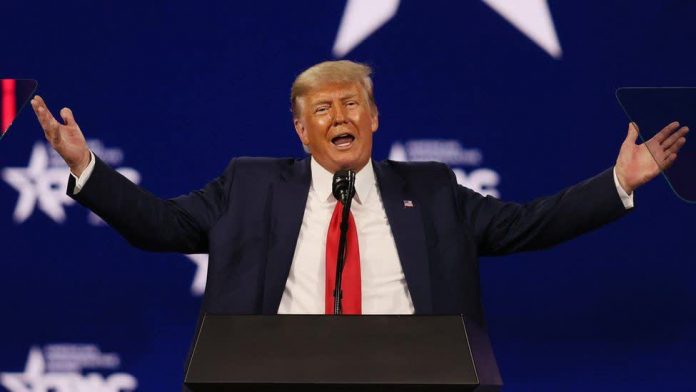 He was barred indefinitely from both sites in January in the wake of posts he made on the US Capitol riots, but last month Facebook’s Oversight Board criticised the open-ended penalty.

Facebook said Mr Trump’s actions were “a severe violation of our rules”.

Mr Trump said the move was “an insult” to the millions who voted for him in last year’s presidential election.

Facebook’s move comes as the social media giant is also ending a policy shielding politicians from some content moderation rules.

It said that it would no longer give politicians immunity for deceptive or abusive content based on their comments being newsworthy.

Mr Trump’s ban was effective from the date of the initial suspension on 7 January, Facebook’s vice-president of global affairs Nick Clegg said in a post.

“Given the gravity of the circumstances that led to Mr Trump’s suspension, we believe his actions constituted a severe violation of our rules which merit the highest penalty available,” it added.

The ban was approved under a new protocol being applied to violations of Facebook rules. Two years – the maximum initial duration – is deemed “long enough to allow a safe period of time after the acts of incitement”, the post said.

How has Mr Trump responded?

In a statement, Mr Trump said: “Facebook’s ruling is an insult to the record-setting 75m people, plus many others, who voted for us…”

“They shouldn’t be allowed to get away with this censoring and silencing, and ultimately, we will win. Our country can’t take this abuse anymore!”

Earlier this week, it emerged that the communications platform set up by Mr Trump in the wake of his social media bans – From the Desk of Donald J Trump – has been permanently shut down.

‘This is a big call’

Facebook’s dilemma on Trump was complex, involved trade-offs, and was guaranteed to upset millions of people. The fact is – whatever their decision – it was bound to be polarising.

But just to be clear: today Facebook, the world’s biggest social network, has denied access to its megaphone to a man who 74 million people voted for. They didn’t just know him, or approve of him; they voted for him to be US president. That is a big call.