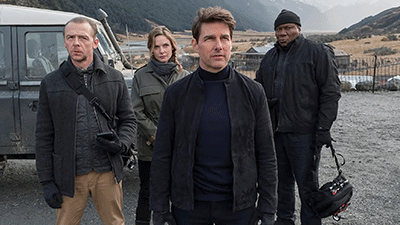 “Mission: Impossible 7” has halted filming after at least one production member tested positive for coronavirus.

“We have temporarily halted production on ‘Mission: Impossible 7’ until June 14th, due to positive coronavirus test results during routine testing,” a Paramount spokesperson said in a statement. “We are following all safety protocols and will continue to monitor the situation.”

It is unclear exactly how many people have tested positive for the virus.

According to The Sun, star Tom Cruise is self-isolating and is allegedly “absolutely fuming about what’s happened, especially given his rant to his staff last year.”

“It’s going to badly affect filming and they’ll be playing catch-up when they finally come back,” the insider added to the outlet.

A rep for Cruise did not immediately respond to Fox News’ request for comment.

Additionally, the production of the film, which was originally supposed to film back-to-back with its sequel, was famously cautious about filming, with Cruise once even shelling out some of his own cash to put up cast and crew members on cruise ships to avoid exposure to others.

“Mission: Impossible 7” started filming before the pandemic even began and was shut down in February 2020 before resuming months later.

Audio of Cruise’s explosive rant leaked in December after he spotted a pair of crew members standing less than 6.5 feet apart, as was recommended in the U.K. where filming was taking place.

“We are creating thousands of jobs you motherf–kers,” he shouted at the time. “I don’t ever want to see it again. Ever. And if you don’t do it, you’re fired, and I see you do it again, you’re f–king gone.”

Just days later, a second rant occurred and Cruise departed the set a few days earlier than expected for his Christmas holiday.

After his return, the crew was “walking on eggshells.”

In January, it was reported that the actor dropped “huge sums” of money for two robots tasked with making sure cast and crew adhere to COVID-19 safety mandates – as well as having the ability to deliver spot tests to the crew – according to The Sun, citing a source on set with insight on the matter.