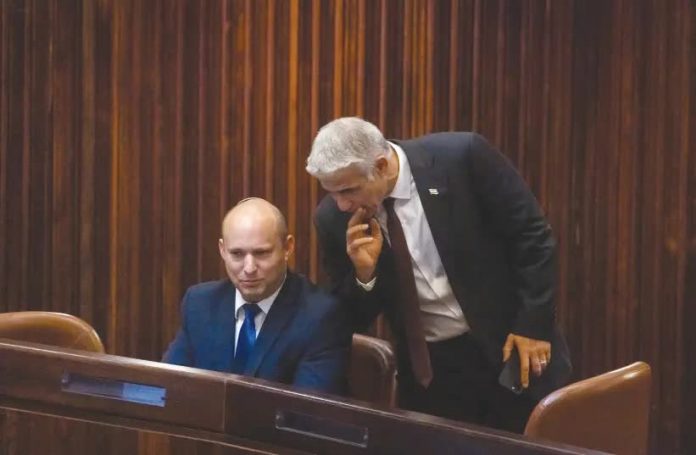 Prime Minister Benjamin Netanyahu will leave office after 4,454 consecutive days on Wednesday, when the new government of incoming prime minister Naftali Bennett is scheduled to be sworn in, a Likud source said on Thursday night.

While Knesset Speaker Yariv Levin would like to keep Netanyahu in office as long as possible, sources acknowledged that he does not intend to fight over a few extra days in deciding when the new government will be brought to a vote of confidence in the Knesset.

The following Monday, June 14, has also not been ruled out.

The 61 MKs due to make up the new coalition submitted a formal request to Secretary of the Knesset Yardena Muller-Horowitz on Thursday to begin the process of replacing Levin. The MKs took the step to facilitate the formation of a government as soon as possible, after Likud officials said Levin would only allow a vote of confidence in the new government at the last possible date permitted by law in order to increase pressure on Yamina MKs to vote against the government.

After the effort to replace him, Levin’s associates said he was ready to compromise on Wednesday, and sources in the new coalition agreed.

The coalition candidate to replace Levin as speaker is Mickey Levy of Yesh Atid.

The effort to replace Levin hit a snag on Thursday, when Yamina MK Nir Orbach said his signature on the letter to Muller-Horowitz was added without his knowledge, and asked that it be withdrawn. Without Orbach, the coalition would not have the 61 MKs needed to unseat Levin.

But Bennett met Orbach and his wife later in the afternoon, and he backed off. Orbach will decide by Friday’s Yamina faction meeting whether to vote in favor of the new government, or resign and enable deaf activist Shirley Pinto, the next candidate on the Yamina list, to enter the Knesset.

“I will do all I can to ensure it will succeed,” Orbach wrote on Twitter about the new government after his meeting with Bennett

Bennett told Channel 12 that “Nir is a friend many years, and I don’t think he’ll turn his back on me.” Orbach became Bennett’s chief of staff in 2012.

In the interview on Thursday night, Bennett said he would soon take office, “end the chaos, and get the country back on track.”

United Arab List (Ra’am) leader Mansour Abbas is a courageous leader, Bennett said, apologizing for calling him a “terror supporter” in the past.

“Our new government will be an opportunity to turn the page between Israel and its Arab citizens,” Bennett said.

Asked if Ra’am could prevent Israel going to war with Hamas or Hezbollah, Bennett said he would take action to maintain Israel’s security regardless of politics, even if it meant going to an election.

He vowed to honor his agreement on a rotation with Yair Lapid as prime minister on August 27, 2023, unlike what Netanyahu did to Blue and White leader Benny Gantz.

“No one wanted to sign agreements with Netanyahu anymore after he broke his last 10 agreements,” Bennett said.

Eve Young and Sarah Ben-Nun contributed to this report.