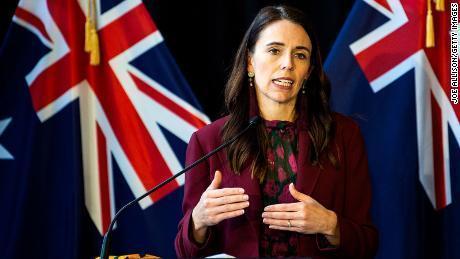 (CNN)“Could it be that New Zealand is turning into … New Xi Land?” questioned an ominous voice over.

It was part of a preview for an incendiary segment of Australian TV show “60 Minutes” premised on the idea that New Zealand is so desperate to keep China, its biggest trading partner, onside that it has cast aside both its morals and its friendship with Canberra.
The clip quickly spread online, and on Monday Australian Prime Minister Scott Morrison flatly denied its suggestion that New Zealand’s approach to China was jeopardizing its relations with Australia.
“Australia and New Zealand are trading nations, but neither of us would ever trade our sovereignty or our values,” Morrison said after talks with Prime Minister Jacinda Ardern in New Zealand’s star tourist attraction, Queenstown.
The phrasing of the 60 Minutes clip may have been bombastic — New Zealand is hardly “New Xi Land” — but it spoke to ongoing questions over New Zealand’s close relationship with Beijing at a time when other countries are taking a tougher approach to China.
In the past year, other members of Five Eyes — a Cold War-era partnership to share intelligence between the United States, Canada, United Kingdom, Australia and New Zealand — have stepped up criticism of Beijing over alleged human rights abuses in Hong Kong and Xinjiang, even labeling Beijing’s actions in the latter a “genocide.” New Zealand has shied away from going that far.
On Monday, Ardern rejected suggestions New Zealand wasn’t taking a strong stance on “incredibly important issues” relating to China, and said it had no intention of abandoning the five-nation alliance.
“When it comes to the matter of Five Eyes, we remain a committed member. That is not in question, not in doubt,” Ardern said.
Ardern and her Foreign Minister Nanaia Mahuta have previously played down criticism they could be doing more on human rights, saying New Zealand is merely forging its own international relations path.
That position presents Arden with a delicate balancing act: she needs to be seen to be backing her Five Eyes allies and their criticism on China, but without being so outspoken that New Zealand is landed with the type of sanctions Beijing has imposed on Australia.
For some, it’s not just trade that’s at stake: if New Zealand is seen as failing to take a strong stance on China, it risks damaging its reputation as a moral leader on human rights.

Speaking out against China

The clearest sign New Zealand is taking a different tack on China than some of its fellow Five Eyes countries came in April, when an opposition party MP announced she would file a motion calling on parliament to follow United Kingdom, the United States and Canada in condemning China’s actions in Xinjiang as “genocide.”
Mounting evidence over the past few years points to a mass incarceration campaign of mainly Muslim ethnic minorities in the region, with survivors alleging widespread abuse, including brainwashing, torture, rape and forced labor.
Beijing vehemently rejects allegations of genocide, and defends the system as a vocational training and deradicalization program vital to ensuring the region’s security.
What ensued was a linguistic tussle ahead of the parliamentary debate.
Ardern’s party wouldn’t support the use of the word “genocide,” so the language was watered down to a discussion on “possible severe human rights abuses.” In the end, the word “possible” was axed after the Ministry of Foreign Affairs and Trade stepped in, according to Radio New Zealand.
The final language mirrored a joint statement from the New Zealand and Australian foreign ministers in March. Australia has also declined to label events in Xinjiang as genocide.
NZ Foreign Minister Mahuta responded to criticism by saying the omission of “genocide” did not reflect a lack of concern. “Genocide is the gravest of international crimes and a formal legal determination should only be reached following a rigorous assessment on the basis of international law,” she said when the motion passed in Parliament in May.
Canterbury University Chinese politics expert Anne-Marie Brady said she was very concerned Labour asked for the wording to be changed. “It appears to be from foreign government pressure,” she added. Opposition politician Gerry Brownlee was quoted in local media earlier this year saying China’s Ambassador to New Zealand had expressed concern Wellington would pass a motion calling Beijing’s actions a genocide.
It wasn’t the first time New Zealand looked soft on China.
In statement January, the Five Eyes countries — bar New Zealand — condemned the arrest of more than 50 opposition parliamentarians and democracy activists in Hong Kong. That month, Wellington upgraded its free trade deal with China while New Zealand’s Trade Minister advised Australia to follow its neighbor’s lead and “show respect.”
In March, 14 countries expressed “concerns” over the World Health Organization (WHO) study into the origins of Covid-19 in China. In a joint statement, they said WHO experts lacked timely access to complete, original data and samples, and called for more research on how viruses spread from animals to humans.
All the Five Eyes countries signed the statement — except New Zealand.
The following month, Mahuta said she was “uncomfortable” with expanding the remit of the Five Eyes intelligence sharing agreement to include foreign policy statements, adding that New Zealand wanted to handle its own messaging, rather than sign on to Five Eyes’ statements.
Ardern later clarified that New Zealand wasn’t leaving the Five Eyes — it just wanted to set its own foreign policy.
There are signs the remit of the 80-year-old Five Eyes agreement has expanded beyond sharing information on espionage. For instance, finance ministers from the Five Eyes nations met last year to discuss the economic impact of Covid-19.
But media and politicians in Five Eyes countries seized on Mahuta’s comments about the network, claiming the Five Eyes could soon become four, and calling Ardern the “West’s woke weak link.” British Conservative MP Bob Seely called Ardern “a Prime Minister who virtue signals whilst crudely sucking up to China whilst backing out of the Five Eyes agreement.”
One country, though, appeared happy with New Zealand’s stance. Chinese Communist Party tabloid, the Global Times, was full of praise for the island nation.
“In sharp contrast with Australia, which tied itself to the US’ chariot, New Zealand has maintained a relatively independent approach on foreign policies, paving the way for the country to pursue policies that benefit its own economy and citizens,” the paper wrote in an editorial.

Why the softer stance?

Trade is at the crux of New Zealand’s apparently softer stance on China, which buys more than a third of New Zealand’s total dairy exports.
“It’s the largest conundrum of our time — how can you protect your economy, yet at the same time make a stand for human rights and the rule of law? Because the things right now are in conflict,” said Alexander Gillespie, an international law expert at the University of Waikato.
New Zealand doesn’t need to look far to see what happens when countries speak out.
Diplomatic relations between neighboring Australia and China fell into a deep chill one year ago, after Prime Minister Scott Morrison called for an independent investigation into the origins of the Covid-19 pandemic which threatened to challenge Beijing’s narrative of the viral outbreak.

It’s the largest conundrum of our time — how can you protect your economy, yet at the same time stand for human rights and the rule of law? Because the things right now are in conflict.

Australian exports to China have faced growing barriers to entry — and overall Chinese investment in Australia fell 62% in 2020.
So rather than follow Australia’s lead, New Zealand is attempting a different kind of relationship.
Since Ardern was elected in 2017, she has worked to recalibrate New Zealand’s relationship with Beijing, taking a more considered approach than her predecessor who welcomed trade with China.
During Ardern’s time in power, Beijing has become increasingly aggressive in the South China Sea and toward the self-ruled island of Taiwan. It has arrested two Canadians in what was seen as hostage diplomacy, and imposed a chilling national security law in Hong Kong — in addition to its actions in Xinjiang.
That’s prompted New Zealand to become more vocal on human rights issues in China than it has been since the 1989 Tiananmen Square massacre, Brady, the Chinese politics expert, wrote in an article released in May.
But while New Zealand has become more outspoken, it’s taking a more subtle approach than other countries, managing the competing demands of staying friends with everyone, but still taking opportunities to speak out on human rights.
“We can’t give away our trade relationship completely, but neither can we give away the things that characterize New Zealand as a nation for the longest time,” said Stephen Jacobi, a former diplomat and former executive director of the New Zealand China Council, an organization majority funded by the New Zealand government that aims to build the relationship between the two countries.
New Zealand had no intention of moving away from the Five Eyes relationship, he said.
“What New Zealand is saying … is that our foreign policy needs to be made in New Zealand. Why is that so incredibly controversial?” he said.

What the future holds

New Zealand is trying to expand its trading base so that losing Beijing’s business becomes less of an issue.
In a major speech in April, Mahuta said: “It is prudent not to put all eggs into a single basket.”
Brady said, rather than criticize New Zealand for its China statements, the other Five Eyes countries could help make New Zealand more resilient by bolstering trade ties.
There are already signs that China is losing patience with New Zealand.
On Monday, foreign ministry spokesman Wang Wenbin accused Ardern and Morrison of making “irresponsible remarks” on China’s internal affairs.
In a joint statement, the leaders expressed concern over developments in the South China Sea, where China has been building military bases, and the erosion of freedoms in Hong Kong.
“The leaders … have made groundless accusations against China, grossly interfered in China’s internal affairs and seriously violated the international law and basic norms governing international relations,” said Wang. “China firmly opposes this.”
Wang’s comments may take the heat off New Zealand as it seeks to assure its Five Eyes partners of its solidarity, but Arden is also coming under pressure at home.
New Zealand’s small Uyghur community has urged parliament to call the oppression “genocide” and to stop importing products made by forced labor in Xinjiang.

A New Zealand-based Uyghur, who asked to be anonymous to protect his and his family’s safety, said even though New Zealand is small, there is value in speaking out about alleged human rights abuses Xinjiang, as the country is a “moral superpower” other countries look up to.
He said New Zealand Uyghurs understood Ardern’s government alone couldn’t save millions of minority Muslims in Xinjiang as the country was not a military superpower. “But they can at least be on the right side of history.”
“When they put trade in front of human life, do you think I’m valued?” he added. “You can always make money, but you can’t make life.”
Law expert Gillespie said it was possible New Zealand’s middle-ground approach could be a master stroke. If it worked, New Zealand could help bring opposing sides together, and help resolve some of the differences between China and other countries, he said.
But it’s unclear how long it can pull off its delicate balancing act.
“We’ve gone into an unenviable position where one side wants us to speak up more, and the other side wants us to speak less,” he said. “The more we try to please both of them, the likelihood is we’re going to annoy both of them as well.”