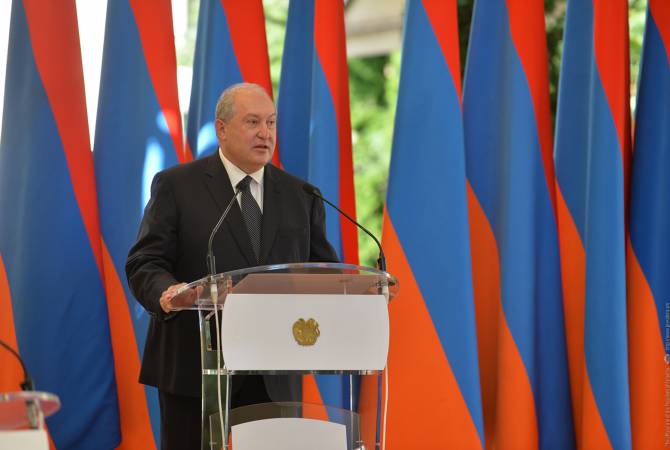 YEREVAN, JUNE 7, ARMENPRESS. President of Armenia Armen Sarkissian has addressed a call on June 7 on the occasion of the launch of pre-election campaign in the country, his Office said.

“Today the campaign for the snap parliamentary elections officially launched in Armenia.

These elections are taking place in exclusively difficult and crisis conditions, our people and state are passing through difficult trials.

I call on all parties and alliances who participate in the elections to be maximally restrained, respect the voter and the opponent, demonstrate prudence and tolerance and hold the election process in an atmosphere of civilized political culture.

I propose all the political forces not to deepen the crisis with their activity, behavior and speech, do not cross the boundaries of morality, do not use dishonest propaganda technologies and remain committed to our national values and collective goal.

All state structures are ought to carry out their duties with high responsibility.

Law enforcement agencies in particular have high responsibility. They are ought to act with a great responsibility and professionalism to guarantee lawfulness and the rule of law, to ensure public order and the normal course of the elections.

I address all voters – by actively participating in the elections let’s demonstrate our attitude towards this or that political force, this or that politician, deeply understanding that we are making an election for our country’s future, development prospect and for the welfare of our generations.

Wishing success to all parties and alliances participating in the elections, I want to remind that the elections, being snap and also decisive for our country, are a normal political process which should be treated with a great responsibility and of which Armenia and our people should get out in a dignified manner”.

The electoral campaign for the snap parliamentary elections officially launched in Armenia on June 7.

The campaign will last until June 18.

The snap parliamentary elections will take place on June 20, but the electronic voting will kick off on June 11 until June 13.

26 political forces – 22 parties and 4 blocs, are participating in the elections.