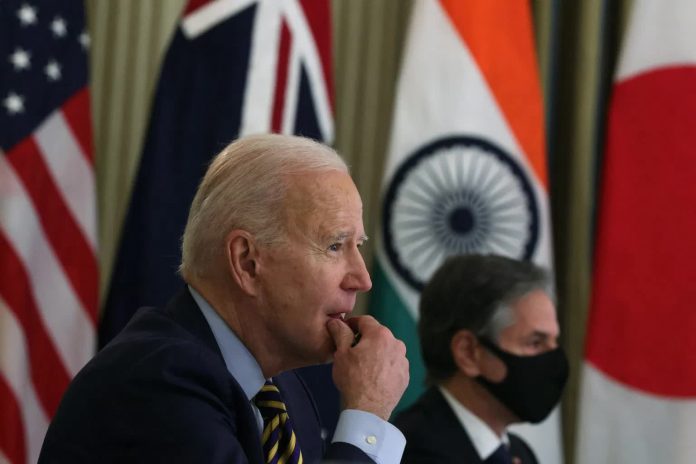 US President Joe Biden and Secretary of State Antony Blinken (right) participate in a virtual meeting with leaders of Quadrilateral Security Dialogue countries March 12, 2021, at the State Dining Room of the White House in Washington. Photo: Alex Wong / Getty Images via AFP

Asia Times’ correspondent Richard Javad Heydarian reported this week on ASEAN’s nagging sense that the Biden administration is neglecting the region, as well as countries’ openness to improving ties with the US as China pushes the envelope in the South China Sea. He shared his thoughts on the subject with the Southeast Asia Insider.

Many earlier hoped Biden would aggressively seek to reset and improve relations with Southeast Asia as part of his alliance-building drive to contain China including in the South China Sea. Why has Biden’s engagement with the region so far been lacking?

The word ‘disappointment’ is a humongous understatement. After four years of Trumpian disruption, with the former president skipping multiple ASEAN summits and his top aides lecturing and threatening regional states on China, the return of the Democratic establishment raised hopes of a fundamental reset in US’ relations with Southeast Asian countries.

After all, one could argue that the former Obama administration oversaw a “golden age” in US-ASEAN relations with few parallels. And now, suddenly a lot of Obama-era officials, including Biden, were back in the saddle. So, quite naturally, many expected for relations to become as nuanced, multifaceted, mutually respectful and long-term-oriented under the new US administration.

To be fair, Trump had his own legions of fans in places such as the Philippines and Vietnam, where the former president’s anti-China rhetoric struck a chord. Not to mention, regional goons, crooks and despots who couldn’t have enough of the American celebrity-turned-president.

But for the majority of regional thought leaders and thoughtful policy makers, the populist in the White House was just a tad too unpredictable, too self-absorbed, and too unreliable to check China’s steady and systematic domination of its near neighborhood. Trump had the right strategy but horrible tactics. With Biden, there was a hope that the US will finally combine Trump’s strategic resolve with Obama’s diplomatic finesse.

No wonder why, according to the influential Singapore-based ISEAS Yusof-Ishak Institute, 61.5% of respondents favored stronger ties with the US, now under Biden, over China. If that’s not a ringing endorsement by regional policy elite, I don’t know what is.

With raised expectations came major disappointment. In its first two months in office, the Biden administration held multiple high-level engagements with allies in Europe as well as with major Indo-Pacific powers of India, Australia, Japan and, later, South Korea. At one point, a single week saw Biden and his “alter ego”, Secretary of State Antony Blinken, holding multiple high-level talks.

That was shuttle diplomacy on steroids. And yet, the same administration didn’t even bother to mention its century-old Southeast Asian treaty allies, the Philippines and Thailand, in its Interim National Security Strategic Guidance; nor did Biden show any urgency in calling up his Southeast Asian partners.

It was only this week that he bothered to call the Filipino populist Rodrigo Duterte amid the deadlock in the renewal of the Visiting Forces Agreement (VFA). This is what? Four months into the Biden administration already!

To add insult to injury, Blinken failed to make any visit to the region, recently dispatching his deputy (Wendy Sherman) instead, though even that downgraded trip, itself coming on the heels of visits to Europe and the Middle East, skips key regional states such as the Philippines and Vietnam.

His scheduled virtual meeting with ASEAN leaders, while on a red-eye trip from Europe to the Middle East was a disaster, as technical glitches left enraged ASEAN foreign ministers waiting 45 minutes before blank screens. Meanwhile, top Chinese leaders, including President Xi Jinping, have kept sustained communications with Southeast Asian counterparts, with Foreign Minister Wang Yi set for in-person meetings with ASEAN this month.

The Biden administration held its first summit-level meeting with Quad allies in March but is only now stepping up its ASEAN-related diplomacy, notably with less robust senior-level engagement. Washington has paid lip service to “ASEAN centrality” in recent statements, but in practice is it really aiming for “Quad centrality?”

On one hand, the Biden administration seems genuinely troubled by the authoritarian lurch across Southeast Asia, especially among former allies in the Philippines and Thailand. With Biden and his top aides projecting global leadership on human rights and democracy issues, their gentle snob of regional despots is perfectly understandable.

There is also the element of frustration with ASEAN’s whimpering response to the crisis in Myanmar. I mean, the African Union recently suspended Mali’s membership following a military coup. In contrast, ASEAN effectively legitimized the brutal junta in Myanmar, even inviting its top conspirator to regional gatherings; not even a gentle slap on the wrist.

Not to mention lingering frustration in DC, and other major Western capitals, over ASEAN’s congenial inefficacy in holding China to account, or at least calling a spade a spade, especially in the South China Sea, where multiple Southeast Asian countries are being harassed and manhandled on a daily basis by the Asian powerhouse.

My sense is, Biden administration officials are too polite to raise their legitimate concerns over ASEAN dysfunctions, but they are also not politic enough to find a way around it, so far.

As for ASEAN, lacking core leadership and increasingly dominated by mediocre and peevish diplomats, there is excessive sensitivity over any slights to so-called “ASEAN centrality”, which is frankly more aspiration than reality in recent years. This explains the pitifully defensive “ASEAN Outlook on the Indo-Pacific” (AOIP) document, which is a classic case of “projection without a project.

Southeast Asian countries are deeply worried about, and for good reasons, “ASEAN peripherality” in the region, especially as two successive US administrations, Trump and Biden, are clearly pivoting towards not Asia per se, but towards major like-minded powers in the region as part of a broader effort to check China’s worst instincts. This leaves the ASEAN on the margins of regional geopolitics.

Beijing has called the Quad a disruptive form of “selective multilateralism” and many see it as paving the way for a de facto “Asian NATO” aimed at containing China. By banking on the Quad rather than ASEAN, is Biden helping or hurting his chances of building a cohesive regional front against perceived rising Chinese assertiveness and expansionism?

The Quad was never a monolithic project, nor was it really about creating an “Asian NATO” per se. Its rise, fall, and, now, reemergence is a reflection of shared concerns over China’s hegemonic ambitions in the region.

With ASEAN failing to hold the line, and China showing little self-restraint in adjacent waters, the US has placed its hopes in major regional powers of India, Australia, Japan and, to a lesser degree, South Korea. There is increasing alignment in threat perceptions among major regional powers, including key Southeast Asian states such as Vietnam, over China.

All major powers in the Indo-Pacific, which also includes key European powers of Britain, France and now even Germany, have realized that they should either hang together in some loose, flexible, yet robust form, or risk handing the whole region on a silver platter to China.

Sure, we are not going to see a NATO-like command-and-control structure with attendant mutual defense obligations; instead, what we are seeing is growing diplomatic, economic and military coordination among these like-minded powers, which has surely got China’s attention. The aim here is not to ‘contain’ China, a la the Soviet Union in the Cold War years, but to instead collectively ‘constrain’ the Asian superpower’s worst instincts.

The hope is that the cumulative effect of coordinated pushback by these like-minded powers will encourage the better angels of China’s nature, namely the more sound and pragmatic voices within the Xi administration, if not inside the Chinese leader’s mind. After all, even President Xi admits that China needs to be more “lovable.”

Where does this leave the ASEAN? Unless the regional body adopts a more majoritarian, rather than a unanimity-based, decision-making process in its multilateral engagements, it risks fast fading into strategic oblivion. But, I see a bright future for ASEAN “minilateralism,” namely the creation of a mini-Quad within the regional body, especially among key powers of Vietnam, Indonesia, Singapore, the Philippines and Malaysia.

I think these five Southeast Asian states are formidable on their own terms, with potential or actual “middle power” capabilities; I think they should and can coordinate their positions on behalf of the dysfunctional regional body, and even have institutionalized cooperation with the Quad and other major Indo-Pacific powers on sensitive geopolitical issues, where the ASEAN can’t make up its mind as a collective body.

From counter-terrorism cooperation and joint maritime patrols to post-independence stabilization of East Timor, ASEAN “minilateralism” has done wonders. Why shouldn’t it do the same when it comes to dealing with China and the South China Sea disputes?