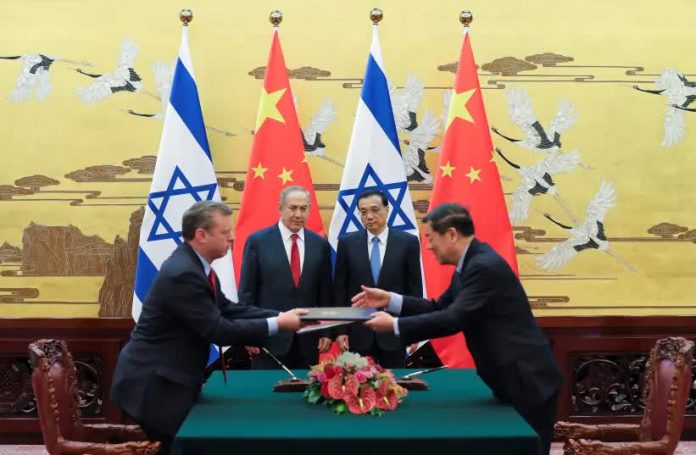 But no way Beijing will end Tehran ties.

China is one of the few actors which could potentially save Israel from Iran in favor of stability, a new report by the Institute for National Security Studies exclusively first obtained by The Jerusalem Post.

According to the report, with Dr. Kevjn Lim as lead author on behalf of INSS, China has started to try harder to portray itself as a “more responsible global power.”

In that light and due to the Islamic Republic’s deep reliance on Beijing, it may be “one of only very few actors, if willing, capable of changing the balance in the Middle East in favor of stability.”

This will not be easy and the report even warns that a direct appeal to China to sever its ties with Tehran would fail.

“Directly persuading China to sever or significantly downgrade its ties with Iran is unrealistic, and probably even counterproductive. Such a strategy would be seen as heckling a major power, one that prides itself on maintaining good ties with all regional actors, into taking sides,” said the report.

Part of the reason, writes Lim, is that “China’s motives for deepening cooperation with Iran have little to do with Israel. Rather than dissuade China from advancing ties with Iran, Jerusalem should instead constantly persuade Beijing, as a non-partisan actor seeking predictability… to pressure Iran into moderating its destabilizing conduct.”

“Alongside more robust and farsighted US policy in the Middle East, this would benefit the entire region’s stability, and with it Chinese commerce and economic interests,” says INSS.

The report further says, “Israel should likewise prod China towards a stricter stance on nuclear assistance and proliferation,” on top of reducing Iranian conventional military aggression.

What leverage does Israel have to convince China?

For one, Lim notes that until Iran moderates its threats against Israel, the Jewish state will likely continue to “degrade and disrupt Iran’s diplomatic, along with economic and military options, and certainly its nuclear program.”

These disruptions can also delay and destabilize Chinese trade with Iran and in the Middle East in general.

In other words, China may not force the Islamic Republic to change direction all at once for stability, it may start to more regularly press for restraint the same way that many US administrations press Jerusalem for restraint.

The report also notes new opportunities for leveraging China to restrain Tehran by virtue of the Abraham Accords.

For example, “If Israel and its burgeoning Sunni allies in the Gulf and elsewhere coordinate with each other in their interactions with China, they face better odds of getting Beijing to factor into account their preferences regarding Iran.”

“At the very least, this could nudge China towards more actively pressing Iran to moderate its conduct… this strategic realignment could also in the longer run shape not only how Beijing conducts its commerce, but also how it thinks about its strategic, diplomatic and security priorities in the region,” writes Lim.

The Shanghai Cooperation Organization (SCO.) is another place that the report states China could positively impact Israel-Iran issues. Israel has applied to the SCO for dialogue partner status, which is two grades lower than being a full member.

If Israel is admitted, the Jewish state would occupy some of the same diplomatic space with Iran.

INSS speculates that “Relative proximity in such forums allows for the possibility of contacts mediated by third parties like China (or Russia),” while conceding progress from such contacts would still likely be very limited.

The report does warn Israel to be careful to balance its closeness to China with its alliance with the US and with the risk of information being leaked to the Islamic Republic.

It states, “the presence of Chinese state-owned enterprises and their subsidiaries in construction and infrastructure projects in both Iran and Israel require careful treatment and insulation, and Jerusalem must assume information-sharing between Beijing and Tehran.”

“Some of these projects are hot-wired with control, signaling, and monitoring networks looped into broader urban or national-level grids that can be electronically disrupted and manipulated, while others may be located in the proximity of sensitive government sites including military, naval, and intelligence facilities,” says the report.

According to INSS, “the China Railway Tunnel Group, which holds 51-percent shares in a joint consortium constructing much of the red line segment of Tel Aviv’s light rail network, is a subsidiary of CREC.”

But “CREC is partnered with the IRGC’s Khatam al-Anbia conglomerate in the construction of the Tehran-Qom-Esfahan fast rail,” notes Lim.

The report explains, “For Israel’s part, recognizing the strengths and limits of China-Iran relations will be crucial to moving forward.”

Lim is a senior risk adviser for the Middle East and North Africa at IHS Markit Country Risk, where he runs the Iran desk and is a research fellow at INSS.