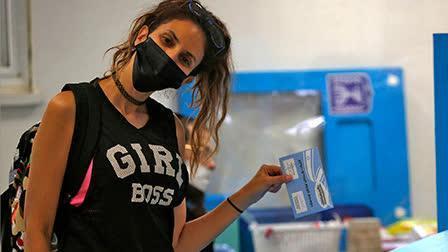 Opinion: With endless election cycles, narrow and disjointed coalitions clinging to power by a thread and no government lasting for more than 2 years, any sane Israeli can see that change is urgently needed

An Israeli woman casts her vote in Tel Aviv in March, during the country’s fourth election in two years(Photo: AFP)

What would you say about a company that files for bankruptcy every six months, asking its stockholders to replace the entire board so a new one can keep going on a “new and better path”?

Anyone with a shred of logical thinking would say the system by which the board of directors is selected was erroneous, inefficient and in need of urgent replacement.

This has been the political state of affairs in Israel for the past two and a half years: shaky governments, an election every few months, an overabundance of small parties and a plethora of hair-brained and nonsensical schemes like “alternative prime minister” and “three-way rotation agreement.”

While in countries like France, the United Kingdom, the U.S. and Germany, the difference between the political left, right and center is clear to voters, in multiple Israeli parties hold essentially the same agenda and beliefs.

What is the real difference between left-wing Meretz and Labor, centrist Yesh Atid and Blue & White or right-wing Yamina, New Hope and Yisrael Beytenu?

There is no reasonable explanation for a democratic system that encourages splits, peculiar and unbalanced coalitions that frequently rest on a single vote and are prone to political blackmail.

It is time to change the system.

While Israel’s experimentation with a direct vote for prime minister is not remembered fondly, the period in which it existed was too short and the subsequent conclusions too hasty and not based on true research.

The country must also review the system through which Knesset seats are allocated, the role of the prime minister and the authority of the president, possibly adopting a bicameral system and introducing an upper chamber in parliament.

In Greece for example, the winning party gets a proportional amount of seats, with an automatic addition of another 50.

In Italy, the president gets to choose not only who forms a government but also who the ministers are.

I wish longevity for the eight-party coalition formed by Yesh Atid leader Yair Lapid and Yamina head Naftali Bennett, even if history is working against it.

Since 1948, Israel has had 35 governments, with each one ruling for an average of two years.

This fact alone would make any sensible citizen realize that the system of government is not working as our founding fathers intended.

Continuing with this system in the face of future challenges, with its numerous faults, will only lead to more failed governments and gravely misguided decisions.