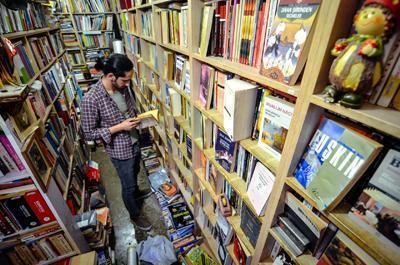 Located in the Central Anatolian province of Konya, the Rampalı Bazaar is famous for its second-hand booksellers and music stores as well as draws the attention of visitors with its vintage ambiance and extraordinary architecture.

The bazaar, which lies close to the city center, brings book lovers, students, academics, musicians and music lovers together under the same roof.

In the five-story bazaar, which takes its name from its architectural structure, the different floors can be accessed through spiral ramps that extend from the ground to the roof without interruption. People who lose their way in the bazaar can find the way to the exit with the help of shopkeepers.

In the bazaar, where it is possible to find all kinds of books from manuscripts, novels and textbooks to academic publications, the sound of music is never lost, thanks to the shops selling instruments and the masters who give music lessons.

Speaking to the state-run Anadolu Agency, Hasan Yıldırım, who has been selling books in the bazaar for 13 years, said that the bazaar was one of the symbolic places in the city. Yıldırım noted that besides students, old book lovers frequently visit the bazaar.

Stating that everything related to books can be found easily in the bazaar, Yıldırım said: “We can define Rampalı Çarşı as a ‘book heaven.’ I think it is one of the best places in terms of books in Central Anatolia, maybe in Turkey. We can even add music to the list.”

Hakkı Bıyık, one of the second-hand booksellers of the bazaar, also said that some people spend time in the bazaar among the books as a habit.

Stating that there are people who come to the market just to smell books, Bıyık said: “Apart from those who come to buy books, there are those who like to wander with books around them. There is a leaden substance inside books that does not age. That’s where the smell comes from. This is also a feature of paper. Some people come just to smell old books.”

Serkan Çakan, who has been working in the music industry for 20 years, selling instruments and giving courses, said that whenever the word “music” is mentioned in the city, the first thing that comes to mind is the Rampalı Bazaar.

“We can call this place ‘the heart of music in Konya’ just like the Unkapanı in Istanbul. People can meet all their musical needs. It has become an address where both booksellers and musicians meet,” he said.