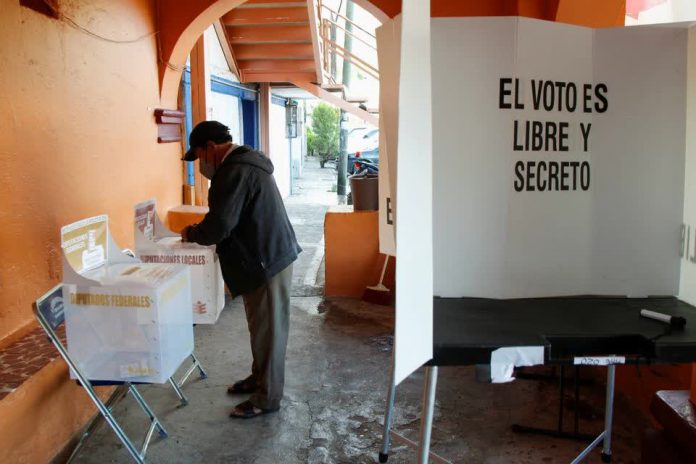 An indigenous Zapotec man casts his vote at a polling station during the mid-term elections in the rural village of San Bartolome Quialana, in Oaxaca state, Mexico June 6, 2021. REUTERS/Jorge Luis Plata

Voting drew to a close on Sunday as Mexicans chose a new lower house of Congress, state governors and local lawmakers, in a race seen as a referendum on President Andres Manuel Lopez Obrador’s policies and shakeup of Mexico’s institutions.

All 500 seats in the lower house, 15 state governorships and thousands of local leadership positions are up for grabs, with some 93.5 million Mexicans eligible to vote.

The contest has taken place amid the COVID-19 pandemic and high levels of criminal violence, with 91 politicians killed in this election cycle, according to security consultancy Etellekt.

Since taking office in 2018 after a landslide victory, Lopez Obrador has expanded the role of the state in the energy sector and radically cut back on the cost of government to channel resources to the poor and his priority infrastructure projects.

In the process, he has eroded institutional checks and balances and frequently criticized autonomous bodies, including the Bank of Mexico, prompting critics to sound the alarm about his concentration of power.

Though voters tend to criticize his government’s record on job creation and fighting crime, they are more skeptical of Mexico’s former rulers, now in opposition. Lopez Obrador has also benefited from the vaccine rollout.

“I stand by my president. They’ve attacked him a lot but I see that he’s doing things right … I’m voting for (the ruling) MORENA party across the board,” said 36-year-old Luis Dominguez in the small municipality of Cuaxomulco in the southeastern state of Tlaxcala.

“We have to support him so he can complete his mission,” said Dominguez.

Recent polls suggest his National Regeneration Movement (MORENA) may lose some of its 253 seats in the lower house, but is still likely to retain a majority with the help of the allied Green and Labor parties. The Senate is not up for election.

To stay on top in the long term, MORENA must improve its record on the economy, officials, lawmakers and voters say. Mexico’s economy contracted 8.5% in 2020, the most since the Great Depression of the 1930s, though it is now clawing back ground, lifted by U.S. demand.

Olivia Aguirre, a 32-year-old academic in Mexico City who voted for Lopez Obrador in 2012 and 2018, said she was disillusioned with the president for his dismissal of women’s protests, lack of support for renewable energy and what she called the “authoritarian” drift of his government.

“I’m not happy about the direction the country is headed,” she said after voting for the opposition in the city’s Roma district.

Many of her contemporaries who had supported him felt the same way, though her parents still supported MORENA, she said.

His tendency to blame his adversaries for Mexico’s problems was no longer acceptable, she said.

With security forces ramping up their presence in violence-plagued states Baja California, Guerrero, Michoacan and Sonora ahead of the voting, crime was a top concern for many Mexicans.

“They promised change but everything is the same or worse. Violence is out of control and the economy is stalled. I don’t see real good options,” said 32-year-old undecided voter Jorge Lopez in the upscale Mexico City neighborhood of Polanco.

In one disturbing instance on Sunday, a man threw a severed head at a voting station in the Terrazas del Valle neighborhood of the border city Tijuana as people voted.

Erik Ulises Ramirez, a candidate for the center-left opposition Citizen’s Movement party who survived an assassination attempt last month in Cocula, Guerrero, said that violence had continued to rise and that two of his collaborators had been kidnapped, beaten and then released.

“It’s very unfortunate that this is happening, really bad. It shows the great impunity that exists and the ties of some of these groups with politics,” said Ramirez.

Sanghani said the president would likely deepen his state-centric policies, especially in the energy sector, in his remaining three years in office.

By law Lopez Obrador can only serve one term, so keeping or expanding a majority in the lower house would allow him to help “pave the way for a friendly political succession in 2024,” said Goldman Sachs economist Alberto Ramos.

Lopez Obrador has made reversing his predecessor’s opening of the energy sector a top priority and has bolstered state oil firm Petroleos Mexicanos (Pemex) and national power utility the Comision Federal de Electricidad (CFE), often to the detriment of private enterprise.

Duncan Wood of the Washington-based Wilson Center said that Lopez Obrador, who describes his administration as the “Fourth Transformation,” wants to leave a lasting imprint on Mexico’s political landscape and to that end could seek to change the constitution and further centralize power in the hands of the executive branch and federal government.