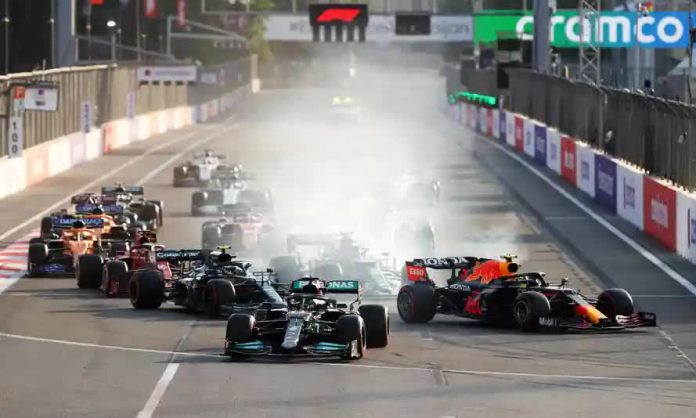 Lewis Hamilton locks up under pressure from Sergio Pérez into the first corner after the restart following a red flag. Photograph: Clive Rose/Getty Images

That Lewis Hamilton might put so much as a finger wrong has come to seem almost inconceivable, so deft his every touch and so sure for so long. Yet at the Azerbaijan Grand Prix the faintest, erroneous brush of his steering wheel proved enormously costly. It left Hamilton and his Mercedes team understandably shellshocked given the world champion had a potentially significant lead in the title fight in his grasp. That lead disappeared in a puff of brake dust as for once the Hamilton magic turned against him.

The race was won by Red Bull’s Sergio Pérez, a superb drive for his second F1 victory, but it was overshadowed by the drama whereby both title protagonists, Hamilton and Max Verstappen, failed to score a point. Verstappen suffered a tyre failure late in the race, costing him a likely win, and Hamilton made a highly unusual error to drop from second to 15th on the penultimate lap. Both incidents will elicit serious investigations.

The import of Hamilton’s vicissitude was writ large on the face of Mercedes’ team principal, Toto Wolff, who looked drained and distraught afterwards. Mercedes knew Baku and Monaco would be perhaps their least competitive races of the season and to have been close to gaining at least 18 points over Verstappen only to see it disappear was clearly difficult to deal with.

“The emotion and frustration is so overwhelming at the moment,” said Wolff.

“Both of us are destroyed to be honest. For him as a driver it’s so close, then it’s all gone.” The decisive moment came as drama enveloped what for much of the afternoon had been a pedestrian affair. Verstappen’s late tyre failure caused the race to be red-flagged on lap 49, leaving a two-lap sprint to the flag, with Hamilton lining up in second beside Pérez. At the restart Hamilton flew from the grid and looked to have the lead, only for his brakes to lock and his car to career straight on into the run-off area.

It seemed inexplicable given Hamilton knew how important it was to consolidate the points. “You have to remember this is a marathon not a sprint,” Wolff said to his team before the restart. Later he said he believed it was a perfect start let down by a tiny imperfection. “Did I have the magic on?” Hamilton asked of the race engineer, Pete Bonnington, afterwards. Bono confirmed he did.

The “magic” button switches brake balance in the car forward to warm the front tyres during formation laps. It is then switched off for the start but Hamilton confirmed he had nudged it on again by accident. It was an almost imperceptible moment in the cockpit but enough to cause the lock-up that cost him so dearly.

“It’s a very painful experience,” said Hamilton. “Today was really a stroke of bad luck but Max had bad luck too. Naturally I am sorry to all the team but we will regroup and try and come back stronger. It’s quite a humbling experience to come away with nothing after all the hard work.” It transpired the day had presented a very personal struggle for Hamilton as well. “It’s quite difficult also because I lost a friend this morning, so it’s a mixture of emotions,” he said.

He had been off the pace almost all weekend and to have claimed a hatful of points with Verstappen out would have been beyond expectations. Wolff admitted this race and the previous round at Monaco were the toughest of his time as team principal. Verstappen, then, had a lucky escape in maintaining his four-point championship lead but more importantly in now walking away from a high-speed crash. The Dutchman had led from Pérez and Hamilton for most of the race before his misfortune.

He went out when his left-rear failed causing a high-speed crash into the wall on the straight. He had a major impact but was unharmed and furious enough at his bad luck to deliver an angry kick to the guilty tyre. Aston Martin’s Lance Stroll also suffered a left-rear failure at 180mph on the main straight and had an even bigger impact with the wall. The incidents have called into question the structural integrity of the Pirelli tyres but Pirelli’s head of F1, Mario Isola, said preliminary investigations suggested debris had been to blame.

Red Bull’s team principal Christian Horner believed it had been a tyre problem rather than a puncture. “I think it’s a tyre failure,” he said. The Red Bull sporting director, Jonathan Wheatley, told the FIA the team had no warning in their data of any impending failure. The FIA red-flagged the race shortly afterwards, allowing all the teams to change their tyres before the restart that proved so costly for Hamilton.

The day belonged to Pérez, who rightly celebrated standing atop the podium joined by Sebastian Vettel in second for Aston Martin and Pierre Gasly in third for AlphaTauri but for the two title contenders the margins remain as fine as ever and the pressure has just ramped up another notch after a memorable race that both will want to forget.