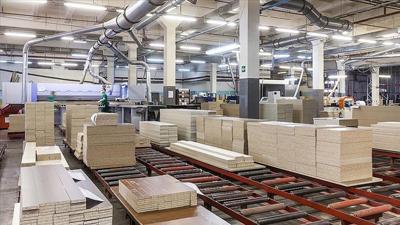 Turkey has started implementing limitations on exports of some raw materials of furniture, including flakeboard, oriented strand board, fiberboard and some types of wood.

According to the country’s Official Gazette on June 4, these materials have been entered in the list of the Goods Subject to Registered Export.

Due to this, exports rose causing a shortage for local furniture manufacturers.

Koray Caliskan, the chairman of Turkey’s major furniture mall Modoko, said producers are facing difficulty to find raw materials, although Turkey is the largest flakeboard and fiberboard producer in Europe.

So far, raw material producers have not provided any solutions for the furniture sector, which makes exports worth around $10 billion annually, he said.

Noting that chipboard and fiberboard exports increased by 71% year-on-year, he said: “Of course, they should export, but while furniture manufacturers cannot find raw materials, their exports harm the country’s economy.”

He added that the export of raw materials to China stops Turkey’s furniture manufacture and hinders the creation of a Turkish furniture brand globally.

He said chipboard and fiberboard exports worth $300 million caused a loss of $3 billion in the furniture sector.

“40,000 firms suffered from these exports, not every export is beneficial for the economy, do not export raw materials.”

When raw material is processed within the country, Turkey can produce and export value-added goods, he noted.

He stressed that the Turkish furniture sector’s exports are $3.5 billion annually with imports at $500 million.

“Our foreign trade surplus is very high, our sector climbed from 13th to 8th place in world exports, and raw material exports would have dropped us back in the world rankings,” he added.