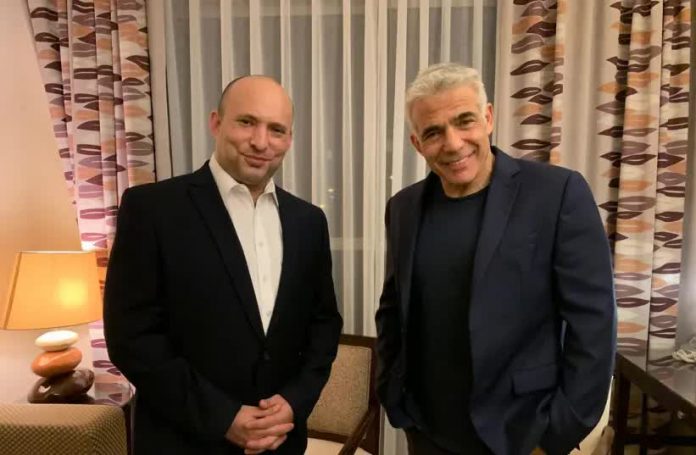 How does one select a director-general, cabinet secretary, national security adviser and top foreign policy and economic advisers not knowing if one will indeed become the prime minister?

Presumptive Incoming Prime Minister Naftali Bennett and Yesh Atid leader Yair Lapid are photographed together in the Kfar Maccabiah Hotel in Ramat Gan after announcing the formation of a new coalition, on June 3, 2021.

When US President Joe Biden took office on January 20, he hit the ground running. The man whom his predecessor, Donald Trump, nicknamed “sleepy,” proved anything but, and in his first 100 days in office, he pushed forward and unveiled several highly significant programs.

These included the passing of a $1.9 trillion COVID-19 relief bill into law, succeeding in getting 200 million coronavirus shots into people’s arms, and unveiling a multitrillion-dollar infrastructure plan that will rival Franklin D. Roosevelt’s New Deal.

The 78-year-old president, who many pigeonholed as someone who would suffice with being a transitional president, gave notice in his first 100 days that he hoped to be a transformative one.

Biden was able to push forward with his agenda for two main reasons. First, he had an agenda.

Second, he had a staff in place for months, getting ready for the day when he would move into the Oval Office, and they would begin to implement plans and projects they had been imagining for months.

The political uncertainty here, which will extend to the very last moment a government needs to be sworn in by, precludes much strategic planning.

Consider this: On May 13, sources close to Yamina head Naftali Bennett were quoted as saying that as a result of the fighting with Hamas, the rioting of Arab Israelis, and the reaction – or lack of reaction – from Arab-Israeli politicians, he was not going to join the anti-Netanyahu coalition backed by United Arab Party (Ra’am) head Mansour Abbas.

Three weeks later, Bennett signed a coalition agreement with Abbas and Yesh Atid head Yair Lapid, and as early as Wednesday, the new government may win a Knesset vote of confidence.

In other words, from one day to the next, Bennett went from someone who said he would not join the anti-Netanyahu government, to being the man who will lead it for the first two years.

It is highly unlikely, because of that very uncertainty, that he had teams working around the clock drawing up plans for what he wants to accomplish during his first three months in office – not knowing until very recently that he would have a first three months in office at all. The way Israel’s system works precludes that type of thorough planning.

It also precludes much of an agenda for the first 100 days, because how can you draw up an agenda if you don’t know until the last minute which parties will be in the coalition?

But forget the big-idea issues for a minute. How about those smaller, more mundane ones?

How does one select a director-general, cabinet secretary, national security adviser and top foreign-policy and economic advisers not knowing if one will indeed become the prime minister?

The prime ministerial role is being thrust upon Bennett relatively last-minute – so those decisions will have to made swiftly, on the run.

So much energy and effort in this country goes into just trying to establish a government, that questions such as how the prime minister will actually run the government and what it hopes to accomplish right off the bat are skirted to the side.

In statements over recent weeks, neither Lapid nor Bennett have spoken of grandiose visions or strategies for when they come into office, partly because the wide ideological differences among the eight component pirates of their coalition preclude them from trying to pursue grand goals.

Rather, the emphasis in their statements has been on simply giving the country industrial quiet, having ministers go to work and deal with the issues they are mandated with – transportation, education, tourism, housing, social welfare – without all the political infighting, drama, and machinations that have characterized the state of affairs here since the last stable government fell in December 2018.

This government’s first line of business needs to be restoring the public’s faith in the government and its ability to deal with the issues that prop up on a day-to-day basis in a meaningful and responsible way.

The first place to start in doing that is to pass the budget, a basic prerequisite for a well-functioning government. This step would go far in giving the citizens a sense that the ministries are working for them.

The second key line of business will be to manage ties with the US. It is likely that within weeks of being sworn in, Bennett will fly to the US for his first meeting in the White House.

While the Prime Minister’s Office traditionally runs and manages the relationship with the US, Netanyahu took that to a whole different level, effectively sidelining the Foreign Ministry as a salient player in dealing with Washington.

And there could be a benefit in this.

Netanyahu has rhetorically asked the public repeatedly over the last few weeks if Bennett or Lapid could be trusted to stand up to Biden when it comes to Iran and building in the settlements and in Jerusalem.

The very question, however, reveals a confrontational mindset; a presumption of a need to clash. Maybe there are other ways to finesse the issues. Netanyahu does have a 40-year relationship with the president, which is something that has redounded in Israel’s favor. But he also carries with him a lot of baggage.

Bennett and Lapid might not have the same history with Biden, but they also don’t carry the same baggage.

Granted, Bennett is laden with the tag of being pro-settlement and a hard-line right-winger, something that will not endear him to the Bernie Sanders-Alexandria Ocasio-Cortez wing of the party.

But Lapid does not have that baggage, and he might be able to find an attentive ear among Democrats who are viscerally opposed to Netanyahu because of his public confrontation with president Barack Obama over the Iranian nuclear deal.

Those representatives who were allergic to Netanyahu are likely negatively predisposed to Bennett already because of pro-annexation and pro-settlement positions he has articulated in the past. They may, however, be more receptive to Lapid.

But for that to work, the paradigm of how Israel-US relations have been run over the last 12 years will have to change, and Bennett and Lapid will need to work in harmony – the key prerequisite, after all, for this government even making it to its first 100 days.