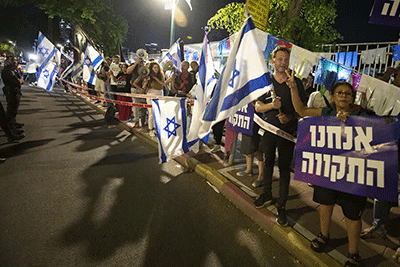 In their first group photo since announcing their “change” coalition, the heads of eight Israeli parties from an unprecedented array of ideologies and backgrounds are seen in dark suits, around a long table, with a pair of blue-and-white Israeli flags propped behind them.

The message of the image featured on Israeli front pages Monday was clear: a visual cue to the public to imagine them as willing and competent partners poised to end Benjamin Netanyahu’s 12-year tenure as prime minister. The display of unity also fit with an emerging public priority: to heal internal divides.

Optics and messaging were also on display Sunday night when Naftali Bennett, a former Netanyahu protégé, took to the Israeli airwaves live in prime time to reassure Israelis that the coalition was not “the biggest election fraud in history,” as Mr. Netanyahu has called it, but the creation of a working democratic process.

Why We Wrote This

What is binding together the unlikely coalition of rivals bidding to govern Israel? Mostly, it’s opposition to Benjamin Netanyahu’s leadership and a desire for change and good governance.

Mr. Bennett, a religious nationalist and former settler leader, is slated to serve as prime minister first in a rotation with Yair Lapid, a secular centrist and former TV newscaster and the driving force behind the unlikely coalition.

“It is not a catastrophe, it’s not a disaster; it’s a change of government, something that is routine in all democratic countries,” Mr. Bennett reminded a public gripped by an intense post-election power struggle. A campaign to delegitimize the coalition, by Mr. Netanyahu and some members of the far-right, has included physical threats and incitement against members of two of the three right-wing parties in the coalition, including Mr. Bennett’s, who have been cast as traitors.

“Let go,” Mr. Bennett said in his televised remarks, addressing Mr. Netanyahu directly. “This is not a government of the left; it’s not us versus them. … No one here is an enemy.”

If approved by parliament, the patchwork coalition would include left-wing progressives, right-wing hard-liners, and the first-ever Arab party in a government. What unites these parties that share hardly a shred of ideology is the desire to rid Israel of Mr. Netanyahu – on trial for corruption charges – who they say has been more focused on his political and legal survival than providing stability and good governance.

Such a broad coalition will be looking for measures it can in fact agree on – from passing the first budget in three years, filling long-vacant appointments, and strategizing a post-pandemic economic recovery plan, to improving the country’s health and education systems. What it is unlikely to be able to do is make any big moves on Palestinians or settlements.

“They are all putting aside their differences and doing the job at hand,” says Mitchell Barak, a political consultant. “We need a stable government, and the country has to move on from Netanyahu. It’s time to move the country in a different direction.”

Yaffa Gisser, a Jewish settler and a board member of Prima, an organization aimed at healing rifts in Israeli society, put it this way in an op-ed for Yediot Aharonot, one of Israel’s largest newspapers: “There is no point in denying the emotional and practical complexity, especially in the context of the events of recent weeks, but there is also no point in ignoring the budding brotherhood, even if it is a brotherhood of interests.”

Before a new government can take power, it has to be approved by a plurality in the Knesset, Israel’s parliament. The exact date for that vote remains uncertain, anywhere from Wednesday to next Monday. The longer a vote is put off, the more time Mr. Netanyahu has to try to peel off defectors from the fragile coalition.

It’s an especially fraught time in the country, which has held four inconclusive elections in two years. The political struggle follows the most recent war between Israel and Hamas, the militant Islamic rulers of the Gaza Strip, in which more than 250 people were killed, mostly Palestinians. Yet accompanying 11 days of cross-border rocket fire by Hamas and the Israeli air force’s bombing of Gaza was mob violence between Arabs and Jews in some Israeli cities, the worst internecine fighting in the country’s history.

According to a survey released Monday by the nonpartisan Israel Democracy Institute, the Israeli public views the tension between Jewish and Arab citizens as the most pressing threat to the country, ahead of both the tensions between the rival political camps and the Israeli-Palestinian conflict. Israelis want the top priority of any new government to be strengthening unity in the country and narrowing the growing economic divide.

The historic inclusion of Raam – the United Arab List, a small, socially conservative Islamic party – has been heralded as a first step to repair some of the harm done not just in the recent fighting, but in the highly sensitive relationship between Jewish Israelis and the Arab minority.

What’s in it for the partners?

When Mr. Lapid is asked what drives him, he says he is working to restore “sane government.”

“From Lapid’s perspective, his main argument has been that Netanyahu has worked in the interest of nationalist, extremist parts of Israeli society, while he and this new government would work for the interest of all Israelis [and] stop the feeling of turmoil, the hate speech,” says Gayil Talshir, a political science professor at The Hebrew University of Jerusalem. “For him, it’s about responsible governance, and for this he has made sacrifices.”

Most noteworthy of those sacrifices was putting himself as the second prime minister in a rotation, two years after Mr. Bennett, in a country where two years is an especially long time and even though his Yesh Atid party, with 17 seats, is the largest bloc in the coalition. Mr. Bennett’s Yemina party has seven, one of which has already defected, but giving him the first crack as premier was the only way to win Yemina’s support.

For Yemina, Hebrew for “rightwards,” and another right-wing party, New Hope, also small at just six seats, joining this coalition is also an act of political survival. If a fifth election were held, they might easily be erased from the political map.

The same can be said for Raam, led by Mansour Abbas, which squeaked into the Knesset in March with four seats, the minimum possible. In joining this coalition, it has a chance to prove itself to its electorate.

“Abbas has the most at stake in maintaining this coalition,” says Professor Talshir. “He needs to bring tangible achievements to the Arab citizens of Israel.”

An about-face on the right

Although Mr. Netanyahu had spent a lot of time in recent years demonizing Israel’s Arab minority – Palestinians who live inside Israel’s borders and have citizenship – in the most recent election he did an about-face. He began courting Arab voters in general and the United Arab List specifically as his hold on power appeared increasingly tenuous. That gave the party a legitimacy in right-wing circles that only Mr. Netanyahu, as a hard-line icon, could bestow. It’s what opened the door for Yemina and New Hope to sit with Raam in a government.

“Many in the religious Zionism movement, on the right and across society in general, understand that we now must step out of our ‘pure’ ideological comfort zone (if such a thing exists) and give a functioning and stable government a chance,” wrote Prima’s Dr. Gisser. “This is a government that will have to set aside about 20% of the issues at the heart of the right-left rift, and manage – responsibly, professionally, and with real cooperation – the 80% of the burning issues that remain.”

Mr. Bennett apologized in a TV interview for calling Mr. Abbas a supporter of terrorism in the past. “Our new government will be an opportunity to turn the page between Israel and its Arab citizens,” he offered.

For staunch hard-liner Avigdor Lieberman, also a onetime Netanyahu adviser and loyalist turned rebel, joining this coalition would gain him the influential post of finance minister. A secularist, he also wins as this would be the first government in decades that does not include ultrareligious Jewish parties.

For Labor and Meretz, the two left-wing parties in the coalition, joining gives them a chance to reposition themselves as having governing abilities. Although Labor has been part of occasional unity governments, Meretz, which is further left, has not been in a ruling coalition for over 20 years.

According to Dr. Talshir, there can be strength in having such a government with a minimal numeric edge. If even one partner bolts, all face a new election, making it in no one’s interest to put too much strain on it.

Its superpower is instead, she suggests, being focused on the greater goal: “Bringing Israel back to the brass tacks of politics, economy, and society, to cherish a more inclusive, tolerant, public discourse.”