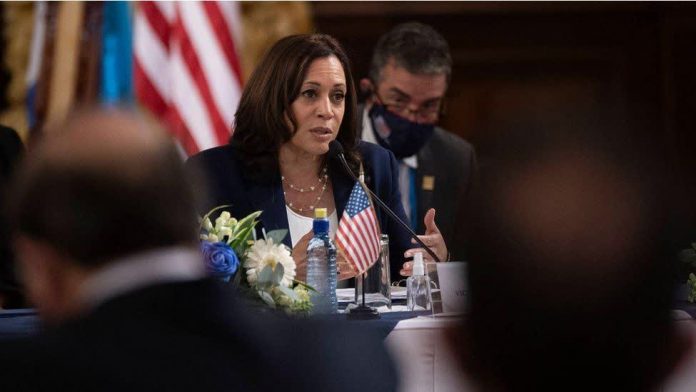 US Vice President Kamala Harris has urged would-be migrants in Guatemala not to try to enter the United States illegally.

Speaking on her first overseas trip since taking office, she said the journey north was dangerous and would mainly benefit people smugglers.

Ms Harris warned people they would be turned back at the border.

She has been tasked by President Joe Biden with controlling a surge in migration at the southern border.

Ms Harris has described her task as finding solutions to tackle the root causes of the border crisis, including corruption and the lack of economic opportunities. Her staff say this first visit is primarily an information-gathering trip.

In a news conference alongside Guatemalan President Alejandro Giammattei, she warned against illegal migration to the US, saying: “Do not come. Do not come. The United States will continue to enforce our laws and secure our borders.”

She added: “If you come to our border, you will be turned back.”

Ms Harris said she wanted the US and Guatemala to “work together” to find solutions to “long-standing problems”.

She said people must be given a “sense of hope that help is on the way”.

President Giammattei defended his government’s own record of fighting corruption and said the fight against drug trafficking should be an key part of tackling the issue.

He announced a new processing centre for migrants who had been sent back from the US and Mexico and said that the focus for both countries should be on creating prosperity.

Ms Harris said the US would send 500,000 coronavirus vaccines to Guatemala and provide $26m (£18.3m) to fight the pandemic there. The region has been hard hit by the virus, further worsening living conditions.

She is also meeting civil society leaders and entrepreneurs in the country before travelling to Mexico on Tuesday.

President Biden has been criticised by Republicans who accuse him of ignoring the crisis on the southern border.

But in a recent speech to Congress, he said: “When I was vice president, I focused on providing the help needed to address these root causes of migration. It helped keep people in their own countries instead of being forced to leave. Our plan worked.”

A trip underlining the scale of the task ahead

For the Guatemalan government, there will have been some satisfaction in being the hosts of the vice-president’s first international visit. It is a sign of improved ties with Washington after the Trump administration. However, in reality, the Biden administration has few other feasible partners in the region, embroiled as they are in diplomatic tension or open conflict with the presidents of Honduras, El Salvador and Nicaragua.

The joint news conference revealed a number of things.

Certainly the rhetoric from the Biden administration is more compassionate than over the past four years. The vice-president mentioned “hunger, hurricanes and pandemic” as “acute” drivers of migration, and talked of empowering the indigenous community in Guatemala.

Certainly the promise of 500,000 doses of the coronavirus vaccine from the US will have been welcomed as the region lags well behind much of the world on the road towards a fully-vaccinated society.

But many Guatemalans will have met other measures with some scepticism.

The proposed anti-trafficking and anti-smuggling measures will struggle to unpick the sophisticated criminal networks, which run the migrant and drug routes north. Despite much talk of creating jobs and incentives inside Guatemala, many know that Washington’s plan also involves bolstering the police and security forces to better prevent migrants from leaving in the first place. And the promise of hundreds of millions in development aid will also ring alarm bells over exactly how those funds will be administered.

Indeed, the discussion of a corruption task force appeared to touch a raw nerve with President Giamattei, who became defensive as he denied “meddling” in the work of anti-graft prosecutors in the country.

If nothing else, this trip has underlined the scale of the task ahead.

What are the key items on Ms Harris’s agenda?

More than 178,000 migrants arrived at the border this April, the highest one-month total in more than two decades, according to US border officials.

Of those migrants, more than 40% originated from the Central American region known as the Northern Triangle: Guatemala, Honduras and El Salvador.

This will be the main focus of Ms Harris’ trip.

A central issue contributing to the border crisis is the corruption of government officials in the region, who have been accused of aiding in drug and human trafficking.

Ms Harris will to discuss the situations in Guatemala and Mexico. But the vice-president has yet to speak to the leaders of Honduras and El Salvador.

“We have the capacity to give people hope,” Ms Harris said last month. “Part of giving people hope is having a very specific commitment to rooting out corruption in the region.”

Many migrants leaving the Northern Triangle say they are fleeing violence, discrimination and poverty.

The steady “brain drain” of locals has exacerbated problems caused by decades of political instability.

These countries have also stressed that they are feeling the most adverse effects of global warming – most notably hurricanes – despite hardly contributing to climate change.

Ms Harris said in her press conference in Guatemala that “we are doing the work of requiring certain progress be made” in order to attract US investment to the region.

She also pledged US investments towards agriculture, entrepreneurship and affordable housing, as well as for “a young women’s empowerment initiative to increase education and opportunities for girls and women”.