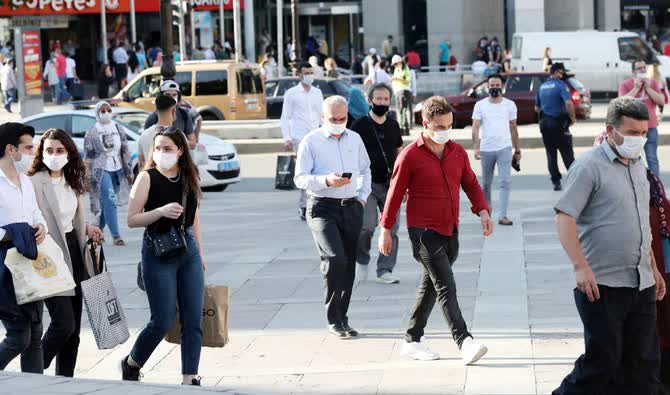 People wear protective face masks against to curb the spread of the novel coronavirus (COVID-19) in Kizilay Square, in Ankara on June 24, 2020. (AFP)

“Germany and Turkey are connected by millions of personal and cultural ties that have formed with the generation of Turkish immigrants and their descendants,” Walter Glos, KAS director in Turkey, told Arab News

ANKARA: Turks are very concerned about the state of their democracy, according to a new survey released on Monday, with 63 percent of respondents saying they thought it was bad and 39 percent saying it was in danger.
The findings are part of the Transatlantic Trends 2021 survey, by the German Marshall Fund of the US (GMF) and sponsored by Konrad-Adenauer-Stiftung (KAS) in Turkey, with the results revealing Turks’ opinions about security challenges, transatlantic cooperation and domestic politics.
It comes ahead of a critical meeting between President Recep Tayyip Erdogan and President Joe Biden on June 14 during the NATO Summit in Brussels.
The Biden administration, which inherited an unsteady bilateral relationship, is expected to mostly focus on Turkey’s democratic record.
According to the survey, Turks thought the most important security challenges facing their country were pandemics, terrorism and migration. A third of respondents wanted a decrease in Turkey’s military involvement in the Middle East.
The survey also said that 40 percent considered Germany the most influential actor in Europe, followed by the UK at 25 percent. Respondents said global health (22 percent), trade (15 percent), and human rights (15 percent) were the priorities for transatlantic cooperation.
“Germany and Turkey are connected by millions of personal and cultural ties that have formed with the generation of Turkish immigrants and their descendants,” Walter Glos, KAS director in Turkey, told Arab News. “Also, Germany is still Turkey’s largest trading partner and foreign investor. Both countries have a fundamental interest in good, close relations based on shared convictions and values.”
Half of respondents saw Chinese influence in global affairs as generally negative, and China was also seen as a rival rather than a partner.
Almost half expected their government to be tougher with China concerning its human rights violations.

While public opinion is not the main driver of foreign policy, it is still consequential and increasingly so given the influence of social media on politics.

Despite Turkey’s recent charm offensive toward Europe, the country was perceived as the least trustworthy partner by people of other nationalities participating in the survey. Turks were found to be the most skeptical respondents about the reliability of the other countries.
“While public opinion is not the main driver of foreign policy, it is still consequential and increasingly so given the influence of social media on politics,” Ozgur Unluhisarcikli, Ankara office director of the GMF, told Arab News.
“Cooperation becomes politically costly when there is lack of public support. While there are cultural and historical reasons for this mutual distrust, rising Islamophobia in the West and nationalism in Turkey, recent tensions between Turkey and its Western allies and public discourses of politicians also play important roles in this outcome.” But he said there was no shortcut to rebuilding trust.
“While responsible political leadership on both sides can reverse the situation in the longer term, public support will not be one of the strong aspects of Turkey’s cooperation with Western allies in the foreseeable future.”
More than a third of Turkish respondents believed that NATO played an important role in the security of their country and most (66 percent) supported closer economic ties between Washington, DC and Ankara.
Half of the respondents found Germany, Sweden and Canada as the most reliable partners, while only 23 percent of Turks saw the US as trustworthy.
Glos said that, despite the increase in tensions in the bilateral relationship in recent years, Germany remained the most important point of reference for Turkey in the EU and was seen as the most reliable partner.
“The EU-Turkey migration agreement would not have come about without the mediation of the German government. Likewise, Turkey is open to mediation efforts by the German government in the dispute in the Aegean with Greece,” he added. “This allows Germany to keep the channels of communication with Turkey open and to demand concessions without having to make concrete offers of cooperation on the part of the EU. Credit has to be given to Chancellor Merkel’s sound problem-oriented diplomacy.”
Germany ranks first in Turkey’s exports at $16 billion and second in imports at almost $22 billion. Nearly 7,000 German firms are active in Turkey.
Glos thought that, despite all odds, Germany was able to criticize Turkey in a constructive way while simultaneously recognizing that Turkey had legitimate interests and must bear particular burdens as a result of the crises and conflicts in the region.
“At the same time, Germany expects the political leadership in Turkey, but also civil society and institutions, to stick to the social, economic and security policy course that is aligned with the values, interests and consultation mechanisms of NATO, the Council of Europe and the EU acquis to which Turkey has been committed for decades,” he said.