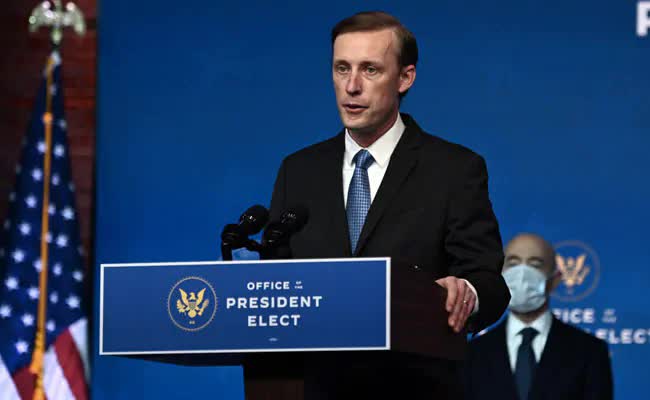 This would be also one of the topics of discussion with foreign leaders as President Joe Biden departs on his maiden overseas trip — after assuming office — this week, Jake Sullivan said.

https://www.ndtv.com-Jake Sullivan also said that at the same time, the US will also launch its own review and process.

The United States in coordination with the international community will continue to press China to be transparent and forthcoming with information on the origins of COVID-19, National Security Advisor Jake Sullivan has said.

He also said that at the same time, the US will also launch its own review and process.

“We are going to continue to press in coordination with the international community, China to be transparent, to be forthcoming with data and information, we’re not going to just stand by and accept that they’ve said they’re not going to participate,” Jake Sullivan told a White House news conference on Monday.

This would be also one of the topics of discussion with foreign leaders as President Joe Biden departs on his maiden overseas trip — after assuming office — this week, he said.

Biden is scheduled to leave on his maiden official overseas trip on Wednesday during which he will hold discussions with top global leaders, including at the G-7 summit in the UK and the NATO meetings.

Meanwhile, at a Congressional testimony, Secretary of State Tony Blinken said that there are two possible scenarios on the origins of the coronavirus.

One is that it emerged from a laboratory and the other is that it was naturally occurring, he said.

“President Biden has ordered a comprehensive government-wide review to try to get to the bottom of what happened,” Tony Blinken said in response to a question from Congressman Steve Chabot, a member of the House Foreign Affairs Committee.

“He initiated an initial review back in March. The results concluded that it was likely to be one of these two scenarios. He’s now asked on a 90-day basis for the entire government to really dig into everything we have, including working with experts to see if we can make a determination,” he said.

Tony Blinken said that at the same time, the US is pressing the World Health Organization to move forward with its phase two study to understand the origins.

Congressman Chabot said the COVID-19 pandemic has made it clear that the economic interdependence with the Chinese Communist Party (CCP) threatens American lives and prosperity.

The CCP is continuing to poison economic ties that were previously thought to be benign, he said.

Tony Blinken alleged that since the beginning of this crisis, China has failed to meet its basic responsibilities in terms of sharing information, providing access and doing that in real-time with transparency.

“That was true at the start. It remains true, unfortunately, today,” he said.

“What you’re seeing is, through the work that’s being done, for example, at the WHO, the work that we’re doing, and the concerns expressed by countries around the world that there is a strong chorus insisting that China will make good on its responsibilities to provide the information,” Tony Blinken said.

He exuded confidence that there is going to be an increasing international demand that countries, including China, meet their responsibilities when it comes to providing information, access, and transparency on global health, including Covid.

“There are just many in Congress who are skeptical of whether or not China is going to grant access to the labs, and we’re trying to understand what the next up is going to be if and when China says that lab access won’t be granted,” Congressman Lee Zeldin asked.

Congresswoman Ann Wagner said that as the US continues to combat the Covid pandemic, it must be united in ensuring that the Peoples’ Republic of China cannot use this time of uncertainty to further undermine global prosperity, stability, and the rule of law.

“We should have acknowledged that right from the onset of this devastating crisis. The Chinese Communist Party, or CCP, suppressed, they misrepresented and they falsified information necessary to prevent a pandemic,” she said.

Holding the CCP accountable is the only way to deter the release of another deadly virus on the global community in the future and to ensure that the communist party stops violating international law and provide compensation to millions of Americans who suffered tragic unthinkable losses over the course of this pandemic, Ann Wagner said.

Ann Wagner had introduced the Compensation for Americans Act in the 116th Congress, which establishes a compensation fund for those affected and allows the president to freeze Chinese assets to bring the communist party to this negotiating table.

Comments “It also gives the United States a comprehensive toolbox of punitive measures to further incentivise China’s cooperation. I will again be introducing this legislation in the 117th Congress and I hope my colleagues will support my efforts to ensure that the United States leads the way in holding the CCP accountable,” she said.