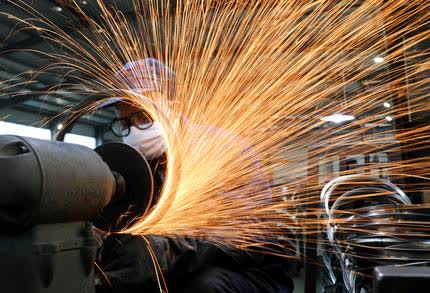 FILE PHOTO: A worker wearing a face mask works on a production line manufacturing bicycle steel rim at a factory, as the country is hit by the novel coronavirus outbreak, in Hangzhou, Zhejiang province, China March 2, 2020. China Daily via REUTERS/File Photo

BEIJING (Reuters) – China’s factory gate prices rose at their fastest annual pace in over 12 years in May due to surging global commodity prices and a low base of comparison, while consumer prices increased for the third straight month but at a slower-than-expected rate.

The producer price index (PPI) increased 9.0% from a year earlier, the National Bureau of Statistics (NBS) said in a statement, driven by significant price increases in crude oil, iron ore and non-ferrous metals. Analysts in a Reuters poll had expected the PPI to rise 8.5% after a 6.8% increase in April.

Prices for commodities including coal, steel, iron ore and copper, which affect the PPI, have surged this year, fuelled by post-lockdown recoveries in demand and ample global liquidity.

Chinese policymakers have pledged to take measures to cool red hot commodity prices and prevent them being passed on to consumers. Soaring producer prices have yet to feed through to China’s consumer inflation, which remains mild and well below the government’s official target of about 3%.

NBS data also showed China’s consumer price index (CPI) rose 1.3% in May in annual terms, the biggest increase in eight months. That was still slower than analysts’ forecast for a 1.6% increase, after a 0.9% gain in April.

China’s gross domestic product (GDP) expanded by a record 18.3% in the first quarter and many economists expect growth will exceed 8% this year.