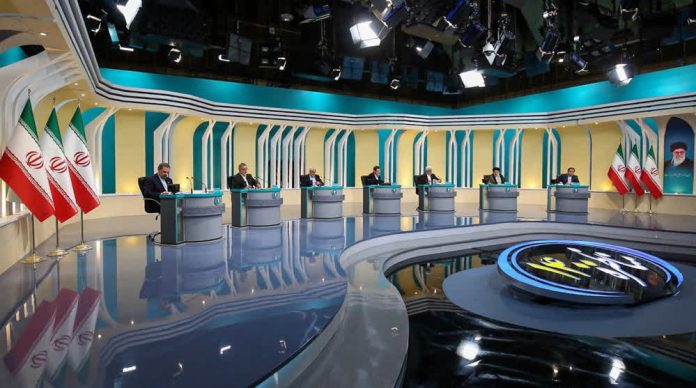 https://www.presstv.com/-The candidates in Iran’s 2021 presidential election are seated according to health protocols for a second debate live on state TV, in Tehran, on June 8, 2021. (Photo by YJC)

The second debate featuring all the seven candidates running in Iran’s 2021 presidential election has been marked by less aggressive confrontations but also overly broad delineations of policy, in what some of the candidates blamed on the format of the debate.

The debate, held on Tuesday (June 8), meagerly resembled the previous round of fiery openings and lightning attacks on rivals, although grand appeals to the nation had not been dispensed with.

Several Principlist candidates attempted to reject a Reformist accusation that they were running as mere “back-ups” for Ebrahim Raeisi, the highest-profile candidate and the current head of the Judiciary. Mohsen Rezaei, a seasoned politician, said early in the debate that he would stick around until the end of the race and would not drop out in any one else’s favor.

Also a recurrent theme was almost back-to-back attacks on Nasser Hemmati, until recently the governor of the Central Bank of Iran and the perceived representative of the President Hassan Rouhani administration.

But the mood of the second debate was by far less confrontational than that of the previous round, when the candidates would raise their voices and even shout words, sometimes as their mikes were cut off because they were out of time. And the candidates also responded to the questions put to them by the moderator more straightforwardly in this round.

Still, four of the candidates took issue with the format of the debate, saying the strict question-and-answer style did not allow for an uninterrupted and more detailed presentation of their plans. One candidate, Hemmati, likened the debate to a TV quiz show. Another, Sa’eed Jalili, proposed that the candidates get together themselves and elaborate on their policies and critique those of others.

Hemmati also repeated an assertion that he was the voice of a purportedly underrepresented majority of the Iranian people, whom he said had decided not to vote.

A rare episode of internal bickering among the Principlist candidates came when Alireza Zakani criticized fellow-Principlist Rezaei over his plan to pay 4,500,000 rials in monthly cash handouts. And Rezaei later hit back by saying he had been surprised when he learned during a 15-minute intermission that a body headed by Zakani had drawn attention to Rezaei’s mispronunciation of a word.

Hemmati and Mohsen Mehr-Alizadeh, the two Reformist candidates, also attempted to stand out by stressing the role of the youth and women in society as well as decision-making, although the Principlists made sure they wouldn’t lag behind on that subject, either. Amir-Hossein Ghazizadeh-Hashemi drew attention to the fact that his own campaign chief was a woman, a mother of three, and said half-jokingly that he would appoint all of his cabinet members from among women to end the question of how many women will be employed by each candidate.

Most notably, Rezaei pledged that he would pursue “reform from within” the system, boasting about his “steady relationship with the establishment” as being conducive to such a potential reconfiguration.

Jalili, in particular, attacked the Rouhani administration, and the president himself, by saying repeatedly that the incumbent and his officials were pursuing policies only “for show.”

And Raeisi complained again about insults that have been thrown at him, including an assertion that he has studied only for six classic grades. Since that accusation was made by Mehr-Alizadeh in the last debate, Raeisi’s campaign has published an image of his doctoral certificate online.