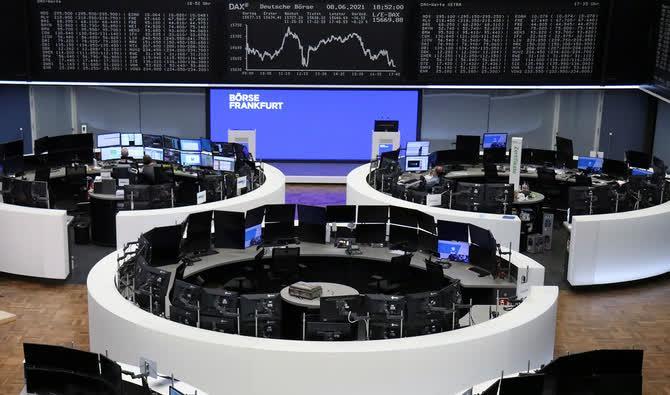 The pan-European STOXX 600 index was flat after notching a record high earlier, with sectors considered more stable such as real estate and telecoms leading the gains.

The travel and leisure index rose 0.7 percent, supported largely by gains in low-cost carrier easyJet after Goldman Sachs upgraded the stock to “buy.”

Data showed German industrial output fell unexpectedly in April, in a further sign that semiconductor shortages and other supply bottlenecks are hampering the recovery in Europe’s largest economy.

Automakers fell 0.5 percent after a six-day rally that took the index close to its record peak.

“I think it says more about the supply constraints. The big question is how long will these remain,” said Teeuwe Mevissen, senior market economist at Rabobank.

“Markets are in a wait-and-see mode. Valuations are high, and they need new catalysts to justify further buying.”

UK’s blue-chip FTSE 100 held steady, boosted by a weaker pound and a 1.6 percent rise in British American Tobacco after it raised its annual revenue growth forecast.

Investor concerns were, however, stoked as The Times reported that Britain’s next phase in easing of lockdown on June 21 could be delayed by a fortnight amid concerns over the spreading of new variants of COVID-19.

Global markets traded in a tight range ahead of a policy meeting of the European Central Bank and US inflation data this week.

The ECB is expected to reaffirm its emergency bond purchases program at the current pace as signs emerge that the euro zone is not recovering as fast as expected, while the inflation reading would be the last key data ahead of the Federal Reserve meeting next week.