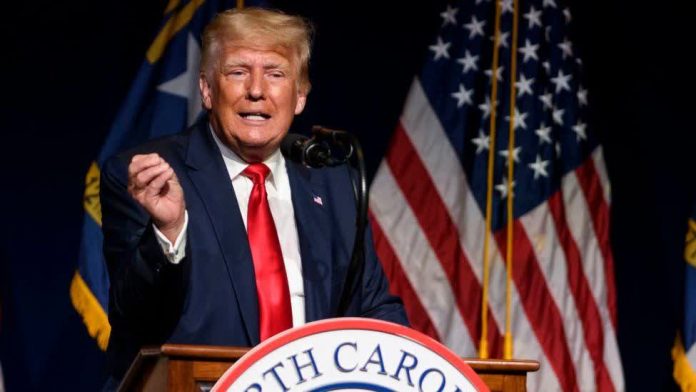 Former US President Donald Trump belatedly congratulated Nigeria for banning Twitter in response to censorship of its president, and urged other countries to do so – while regretting not doing the same while in the White House.

“Congratulations to the country of Nigeria, who just banned Twitter because they banned their President,” Trump said in a statement on Tuesday.

More COUNTRIES should ban Twitter and Facebook for not allowing free and open speech – all voices should be heard.

“In the meantime, competitors will emerge and take hold. Who are they to dictate good and evil if they themselves are evil?” he added.

The government in Abuja announced last Friday that it would suspend Twitter’s operations in the country following the 12-hour lockout of President Muhammadu Buhari’s account. Buhari was censored for what Twitter said was “glorifying violence” and making threats – the same grounds Twitter used to censor Trump – and then the White House account – last year, during the riots in Minneapolis and Washington, DC.

Twitter eventually banned Trump entirely after the January 6 riot at the US Capitol, while he was still the sitting president. Other social media platforms followed suit. Not only is he currently banned from having an account himself, others interviewing him get censored for daring to broadcast his “voice.”

Trump’s aide Jason Miller chose to highlight the line about competitors emerging to tease a new social media platform, reportedly in the works by Trump himself. At the end of May, the former president shut down his ‘Desk’ blog that mimicked his Twitter feed but was likewise censored by Big Tech.

Trump also seemed to regret not having acted more forcefully against social media platforms while in office. “Perhaps I should have done it while I was President,” he noted in the statement. “But [Facebook CEO Mark] Zuckerberg kept calling me and coming to the White House for dinner telling me how great I was. 2024?”

Trump’s executive order from May 2020, instructing the US government to hold social media platforms accountable for censorship in bad faith, was never enforced. Instead, the Justice Department and other regulators stood by while Twitter, Facebook and YouTube teamed up with activists to “fortify” the 2020 election against Trump and in favor of his Democrat challenger Joe Biden.

Zuckerberg personally donated $300 million to specific jurisdictions to support a massive mail-in voting infrastructure, and was praised by corporate media for “saving the election.”