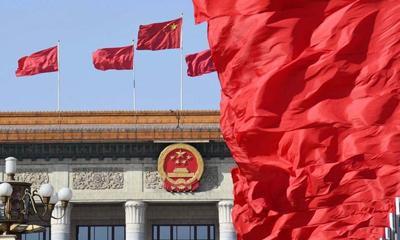 By Chen Qingqing and Liu Xin

Top lawmakers in China on Thursday voted to pass the highly expected Anti-foreign Sanctions Law, providing a comprehensive legal basis for blocking illegal foreign sanctions and preventing Chinese individuals and entities from suffering the damage resulting from such illegal sanctions. The new law will also offer sufficient legal foundation for taking an equal position with the West by imposing necessary countermeasures, Chinese legal experts said.
The Standing Committee of the 13th National People’s Congress (NPC) convened its 29th session on Monday in Beijing, which is scheduled to conclude on Thursday, and draft version of the anti-foreign sanctions law was put to review for the second time on Monday. According to the rules and procedures of the legislative body, a draft law in the agenda of the NPC Standing Committee meeting should generally be reviewed three times before being put to a vote. However, if there is consensus on all aspects of the draft law, it can be reviewed twice.

Legal experts believed that the Anti-foreign Sanctions Law, the first of its kind in China, will provide strong legal support and guarantees for the country against unilateral and discriminatory measures imposed by foreign countries, will also have a deterrent effect in the face of Western-led hegemony and demonstrate the collective determination of Chinese decision-makers in safeguarding China’s core interests.

Compared to the previous countermeasures issued by administrative institutions, the law underscores in a more comprehensive and systematic way the Chinese government’s attitude on the legal aspect when it confronts US government that has abused sanctions or long-arm jurisdiction to severely damage China’s sovereignty, security and development interests, some legal experts who took part in the consultation process for the law told the Global Times. The anti-foreign sanctions law will also enable China to strike a balance between countermeasures and negotiations in fixing divergences.

The US government has been imposing sanctions on a growing number of Chinese entities such as high-tech firms Huawei and ZTE over the so-called national security risks, and sanctioned a number of senior Chinese officials under the US’ so-called Xinjiang and Hong Kong bills last year. In the eyes of legal experts, these have become regular moves for the US government in implementing illegal sanctions and carrying out long-arm jurisdiction against China. The Anti-foreign Sanctions Law has also become a timely response to those unilateral moves, which may prompt more countries to follow suit.

The latest legislative progress was also in line with the top legislature’s annual work schedule, unveiled in March, which indicated that China will enhance legislation in foreign-related fields, when Li Zhanshu, chairman of the Standing Committee of the NPC, vowed to focus on moves against sanctions and interference and countering long-arm jurisdiction, as well as enriching the legal “toolbox” for coping with foreign-related challenges and preventing risks.

The law could have an influence in two fields – blocking illegal sanctions imposed by other countries and the damage brought by those sanctions; and taking countermeasures against these sanctions, Tian Feilong, a legal expert at Beihang University in Beijing, told the Global Times on Thursday.

In response to the increasing unilateral moves made by the US government, Chinese authorities have also taken corresponding countermeasures since September 2020. For example, China’s Ministry of Commerce (MOFCOM) unveiled the provisions of China’s unreliable entity list, which has been viewed by some as a measure by Beijing to counter the US crackdown on Chinese companies. It also issued a new order on January 9 adopting necessary countermeasures against the unjustified extraterritorial application of foreign legislation.

China’s Foreign Ministry also announced 11 rounds of countermeasures over Western countries’ interference in China’s internal affairs such as Xinjiang and Hong Kong by sanctioning a number of NGOs, anti-China politicians, arms producers and entities as well as lawmakers who helped spread lies about those matters.

“Previous sanctions are fragmented and without sufficient legal basis, and may incur negative feedback due to lack of sufficient legal basis. Now, we have complete legal basis, offering us the same position as the West in taking countermeasures,” Tian said, noting that it will also help integrate previous resources and forms to make China’s countermeasures against foreign sanctions more systematic, scientific and powerful.

When asked whether the law would affect China’s relations with foreign countries, Wang Wenbin, spokesperson of the Chinese Foreign Ministry, said at a routine press conference on Thursday that there is no need to worry about that.

It’s necessary for China to formulate the Anti-foreign Sanctions Law, as the law provides strong legal basis and support for China to counteract foreign discriminatory measures.