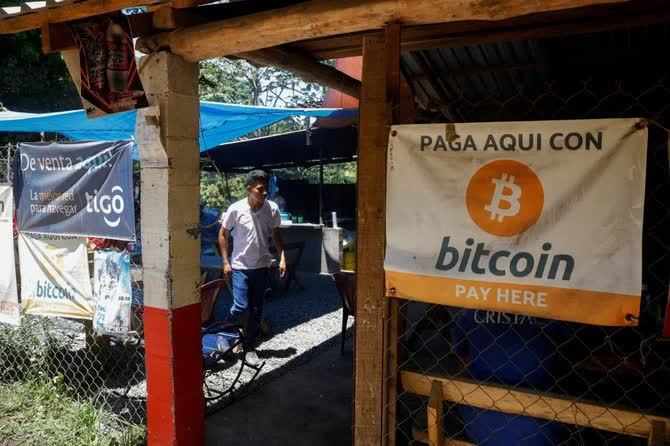 Bitcoin banners are seen outside of a small restaurant at El Zonte Beach in Chiltiupan, El Salvador on June 8, 2021. (REUTERS/Jose Cabezas)

SAN SALVADOR: El Salvador became the first country in the world to adopt bitcoin as legal tender after Congress on Wednesday approved President Nayib Bukele’s proposal to embrace the cryptocurrency, a move that delighted the currency’s supporters.
With 62 out of 84 possible votes, lawmakers voted in favor of the move to create a law to adopt bitcoin, despite concern about the potential impact on El Salvador’s program with the International Monetary Fund.
Bukele has touted the use of bitcoin for its potential to help Salvadorans living abroad to send remittances back home, while saying the US dollar will also continue as legal tender. El Salvador does not have its own currency.
“It will bring financial inclusion, investment, tourism, innovation and economic development for our country,” Bukele said in a tweet shortly before the vote in Congress, which is controlled by his party and allies.
In an idea he appeared to have developed overnight, Bukele later said he had instructed state-owned geothermal electric firm LaGeo to develop a plan to offer bitcoin mining facilities using renewable energy from the country’s volcanoes.
He said the idea was to build a bitcoin mining hub around the country’s geothermal potential. He also said that El Salvador would offer citizenship to people who showed evidence they had invested in at least three bitcoins.
The use of bitcoin will be optional for individuals and would not bring risks to users, Bukele said, with the government guaranteeing convertibility to dollars at the time of transaction through a $150 million trust created at the country’s development bank BANDESAL.
Under the law, bitcoin must be accepted by firms when offered as payment for goods and services. Tax contributions can also be paid in the cryptocurrency.
“If you go to a McDonald’s or whatever, they cannot say we’re not going to take your bitcoin, they have to take it by law because it’s a legal tender,” Bukele said in an online conversation he held with crypto-currency industry figures in parallel to the debate in Congress.
Its use as legal tender will begin in 90 days, with the bitcoin-dollar exchange rate set by the market. Bukele said the government and Central Bank did not currently hold any bitcoin.
Cryptocurrency supporters hailed the move as legitimising the emerging asset, but its impact on bitcoin regulation, taxation or adoption in other countries remains to be seen.
There were no immediate signs that other countries would follow El Salvador’s embrace of bitcoin.
“Whether this becomes the first in what becomes a trend and then snowballs, or whether this will be a blip, we will only know through history,” said Brandon Thomas, partner at advisory firm Grayline Group.
Analysts have also said the move could complicate talks with the IMF, where El Salvador seeks a more than $1 billion program.
Bukele said he will meet with the IMF on Thursday to discuss the bitcoin law, among other issues. He said in setting up the meeting he had tried to explain to them that the shift was “not going to change our macroeconomics.”
Bitcoin enjoyed its best day in two weeks, rising as much as 6 percent to $35,200.
“The market will now be focused on adoption through El Salvador and whether other nations follow,” said Richard Galvin of crypto fund Digital Asset Capital Management. “This could be a key catalyst for bitcoin over the next two to three years.”

Beach inspiration
It was not immediately clear how long Bukele had been working on the bitcoin plan, but he said on Wednesday he was inspired by a project called Bitcoin Beach that introduced the cryptocurrency in an El Salvador beach town last year.
He worked on the idea with Jack Mallers, CEO of Strike, a digital wallet that uses the Lightning Network to enable small payments in Bitcoin.
Bukele has also pointed out a tweet of his from 2017, before he was a presidential candidate, in which he suggested using bitcoin.
Emerging economies — where bank penetration is much lower than in developed countries and reliance on money transfers from abroad much higher — have quickly warmed to cryptocurrencies.
Outside the United States, countries with the highest crypto production and trading volumes are all developing nations, according to BofA, including China, Colombia and India.
Bukele says some 70 percent of people in El Salvador lack access to traditional financial services.
But the use of digital currencies in general can also pose risks for dollarized economies, analysts say.
“The root cause of dollarization is high local inflation, which could worsen, too, if digital currencies prove inflationary,” said David Hauner at BofA.
El Salvador relies heavily on money sent back from workers abroad. World Bank data showed remittances to the country made up nearly $6 billion or around a fifth of GDP in 2019, one of the highest ratios in the world. The cryptocurrency offers, in theory, a quick and cheap way to send money across borders without relying on remittance firms typically used for such transactions. It is not clear what proportion of remittances sent to El Salvador are in bitcoin.
Converting local currencies to and from bitcoin often relies on informal brokers, while trading often demands technical knowledge.
El Salvador will promote training and mechanisms to allow access to bitcoin transactions, the law said.
Financial regulators and policymakers warn bitcoin facilitates money laundering and other illicit uses.
Bukele brushed off the fears, saying criminals already use US dollars and other assets to launder money.
“The problem is not the dollar, it is the criminals,” he said.