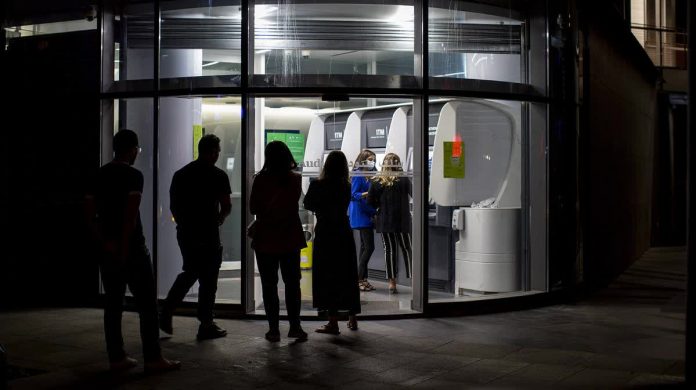 People wait to use ATMs outside a closed bank in Beirut, on June 2.Photographer: Hassan Ammar/AP Photo

Gerry Rice, spokesman for the Washington-based fund, said it wasn’t clear how the withdrawals would be financed given the scarcity of foreign currency amid the country’s economic crisis, and the need to continue financing imports of goods and services.

“There is also a serious risk that the amount of liras in circulation would increase further from already pretty high growth rates, thus adding both to inflationary pressures, and to the depreciation of the lira, which would be highly detrimental to standards of living” he said.

The central bank has asked local lenders to begin paying withdraw requests half in dollars and half in Lebanese pounds, or liras, based on an exchange rate set by the regulator’s platform, currently 12,000 pounds per dollar. The country’s decades-old peg has collapsed from a fixed 1,507.5 pounds per dollar to nearly 14,000 on the black market.

Commercial banks stopped dispensing dollars over a year ago after foreign-currency inflows dried up during a spiraling economic and political crisis, and central bank reserves plunged.

Rice said a capital-control law that Lebanon’s parliament is nearly done drafting should be part of a broader package of reforms and appropriate fiscal monetary measures.

“We don’t see the need to implement a capital control law. No, especially without the support of appropriate fiscal monetary and exchange rate policies,” he said.

Lebanon’s talks with the IMF over a $10 billion bailout fell through after the central bank and lenders disputed so-called embedded losses in the financial sector. The resignation of the government last year following an explosion at the Port of Beirut, and the current paralysis in forming a new one, brought an indefinite halt to the negotiations.

Authorities have failed to enact a capital-control law to formalize de facto withdrawal restrictions by local lenders that critics say are selective. The judiciary is investigating what it has termed illegal transfers of billions of dollars at the onset of the crisis in 2019.