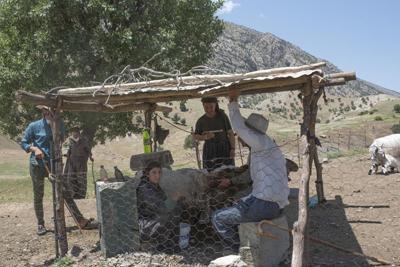 By Karlos Zurutuza in

A massive billboard depicting the leadership of the Kurdistan Workers Party (PKK) and a set of flags of the armed group and its affiliates mark the entrance to the Qandil mountains, an imposing natural fortress on the Iran-Iraq border where Kurdish guerrilla fighters have had their headquarters for the last two decades.

The PKK’s fighters are currently nowhere to be seen, not even at the main checkpoint where they used to man the traffic in and out until recent times.

Armed drones have been very much a game-changer all across the region over the last two years, and fixed road controls are already something of the past. But that doesn’t mean no one is watching.

A number of armed men on motorbikes patrol the road leading northeast towards Bokriskan.

The village is comprised of a cluster of scattered houses alongside the only tarmac road which includes a grocery shop, a humble hospital, as well as the town hall building.

A big portrait of Abdullah Ocalan, the imprisoned leader and co-founder of the PKK, adorns its only room.

Having adopted Ocalan’s much-touted system of “democratic confederalism”, it is the only municipality of this kind all across Iraq.

“The system was established in 2009. Since then, we’ve been struggling to cater to 63 villages in the area by providing the most basic services such as water, electricity, medical assistance or a proper road for around 3000 families,” explained Mohamed Hassan, a 32-year-old former journalist who has served as a co-major of Qandil’s unique civil administration since 2014.

“Each of the 63 villages chooses two representatives, male and female, and those will be the ones who will vote for Qandil’s two co-majors. I didn’t want to take the seat in the last elections. but they asked me to do so,” recalls Hassan.

He said he faced a “massive task” with “hardly any support” from the Iraqi Kurdish authorities.

According to Hassan, links between Qandil and the Kurdish Democratic Party (KDP) – the ruling party in Iraq’s Kurdish region – were cut in 2017. This left the Qandil administration to rely on three workers paid by the Patriotic Union of Kurdistan (PUK), the second Iraqi Kurdish political party that has generally enjoyed better relations with the PKK.

Turkey and the PKK have engaged in a cat-and-mouse war since the Kurdish rebels launched a full-scale insurgency against the Turkish state’s repression in 1984. Their main training camps in Lebanon’s Bekaa Valley were moved to the Qandil mountains in 1998, after the expulsion of Ocalan from Syria, and the mountain fortress has been a safe haven for Kurdish fighters ever since.

A new escalation in the conflict was ignited in February when 13 Turkish captives – both military and police personnel – were killed in a cave complex in an Iraqi Kurdish area 300 miles northwest of Qandil.

Turkey says they were executed by Kurdish militants, while the PKK has said it was due to the effect of Turkish air strikes.

On 23 April 2021, Ankara launched Operation Claw-Lighting and Claw-Thunderbolt, the latest in a series of cross-border campaigns since 2019 that have resulted in dozens of permanent Turkish military bases in Iraqi Kurdish territory, most of them close to the Turkish border.

In Qandil, Mohamed Hassan said they had been under constant shelling from Turkish drones and fighters for years, but the situation had worsened over the last few months.

“People are scared, many are leaving, and there’s little we can do about it,” lamented the co-major before resuming his duties. A delegate from an Iraqi Kurdish NGO had just arrived in the village with an offer to send a batch of medicines to cope with the Covid-19 emergency.

Up the road further north, traces of the air raids are visible in craters on the ground, burnt trees and destroyed vehicles nobody has yet bothered to remove. Just seven miles north of Bokriskan lies the village of Zergely, where eight villagers were killed in an air strike in August 2015.

The remains of their derelict houses pay witness to that tragic episode, as well as their portraits inside a memorial house erected a few metres away.

Those looking for a first-hand account can always ask Rinaz Rojhilat, the owner of Zergely’s only shop. The 50-year-old Kurd was among those who helped recover the wounded from the debris that night. Just a few weeks later, his older son was killed in Kobane, Syria, during the fight against the Islamic State group.

“Too many have left for fear of the air strikes,” said Rojhilat from his business that is just opposite the memorial house.

It’s true: less than half of the original 200 inhabitants of Zergely remain in the village, 31-year-old Saba Abdullah among those.

“How could I possibly make ends meet for me and my family in the city? Who would take care of my orchards and my bees?” asked Abdullah, while he carefully piled up boxes of honey jars in the boot of his car.

“There was no PKK here 40 years ago and they would still bomb the area every now and then.”

Several international organisations have consistently denounced the impact on civilians of such operations. According to data gathered by the monitoring group Airwars, Turkish military air strikes in Iraq are now higher than at any point since a ceasefire broke down in 2015.

In a report released in July 2020, Human Rights Watch called on Turkey to investigate attacks harming civilians and compensate the victims.

The New York-based NGO has also highlighted the issue in its World Report 2021. Moreover, a report published on 3 June by Christian Peacemakers Teams claimed that more than 1,500 civilians from 22 villages had evacuated their villages to escape Turkey’s assault since April, including some mainly inhabited by the local Christian Assyrian minority.

From an undisclosed location in the Qandil mountains, PKK spokesperson Zagros Hiwa said that targeting his group was far from Turkey’s only goal in the region.

“Turkey’s main goal in Iraq is to completely invade South Kurdistan (northern Iraq). With this last operation, they also aim at undoing all Kurdish gains and subjecting the Kurds, Christians, Syriacs, and other ethnic and religious groups to genocide and ethnic cleansing,” claimed Hiwa.

He also accused Ankara of using chemical weapons 13 times against the tunnels and positions of the PKK while he underlined the issue of the evacuated villages and damage to natural life.

When asked if civilians would feel safer if the PKK pulled out of the region, Hiwa was blunt: “Turkey may have now prioritised the killing of Kurdish freedom fighters, but no Kurdish civilian is protected from Erdogan’s war and oppression machine, be it in Qandil, in Diyarbakir, in Afrin, or even in Washington.”

The cross-border operations have become a thorn in the diplomatic relations between Ankara and Baghdad. On 3 May, Iraq summoned Ankara’s envoy in Baghdad to protest the visit by its defence chief to a military base in northern Iraq.

According to a statement issued by the Iraqi foreign ministry, the Turkish diplomat was told Baghdad “categorically rejects the continuing violations of Iraqi sovereignty…by the Turkish military forces”.

In a speech given by AKP spokesperson Omer Celik, Turkey’s ruling party, the Turkish official stressed that “the presence of the terrorist organisation PKK is also a violation of the sovereignty of Iraq, according to the Iraqi Constitution,” while he defended Turkey’s “legitimate right to respond to terrorist attacks directed against our country from that territory”.

Iraqi Kurdistan’s ruling political power, the Kurdistan Democratic Party (KDP), has developed strong economic ties with Turkey and effectively allowed Ankara to set up its string of military bases and expand operations against the PKK on Iraqi soil in recent years.

Clashes between Kurdish militants and Peshmerga forces – Iraqi Kurdish soldiers – are not rare. And on 5 June, the Kurdistan Regional Government (KRG) presidency renewed a call for the PKK to pull out from KRG territories after a skirmish that resulted in five deadly casualties among the Peshmerga soldiers.

The PKK denied its responsibility in the killing while claiming that it couldn’t be determined whether the cause was a landmine explosion or an aerial attack. The same day, a Turkish air strike killed at least three people and injured others at a camp for displaced people in northern Iraq.

Turkish officials refused to comment on the questions forwarded by MEE.

Zagros Hiwa claims that Turkey has irredentist ambitions in Iraq, while this is officially denied by the Turkish government, it has been backed up by some analysts.

“Turkey has never discarded its aspirations to retrieve parts of Syria and Iraq which were once part of the Ottoman empire. It’s a narrative constantly being repeated by ultra-nationalist sectors in the different Turkish governments,” explains Manuel Martorell, a renowned Spanish journalist and Kurdish affairs expert.

According to Martorell, both Ankara and the KDP see Kurdish rebels as a threat to their interests.

“They have been collaborating to kick them out of those mountains for already four decades. However, neither the Iraqi Kurdish ruling party nor Baghdad are able to prevent the Turkish presence in the area and the constant violations of the most basic human rights,” concluded the researcher.

Villagers in Qandil said its difficult to remember the day when the buzz of drones became part of daily life as much as the trill of birds or the barking of dogs while they walk their cattle. Shepherds, however, are getting increasingly rare: only a handful of nomadic families still stick to the same ancient mountain routes in search of new pastures.

Komitan is one of those 63 villages in Qandil that can hardly be found on any map, and soon there might not be a need to do so. Only the Nebi family remains, in a humble tent the family has set up not too far away from the empty checkpoint at the entrance of the valley.

“We used to be 40 families here, but now it’s just us. One of our relatives was killed in 2018 and our house was destroyed a year later. Our land was burnt and we lose sheep every now and then to the air strikes,” says Basik Nebi, a 66-year-old shepherd.

The woman admits that leaving for good is a possibility that looms constantly over their heads, “very much like the drones”, she jokes. Basik says life has never been easy in these mountains.

“Back in the times, it would be Saddam Hussein, and the Iranians also pound us whenever they see fit.”

This year, a severe drought has also added to an already long list of threats.

“We’re waiting for the rain, but so far we’ve only got bombs.”