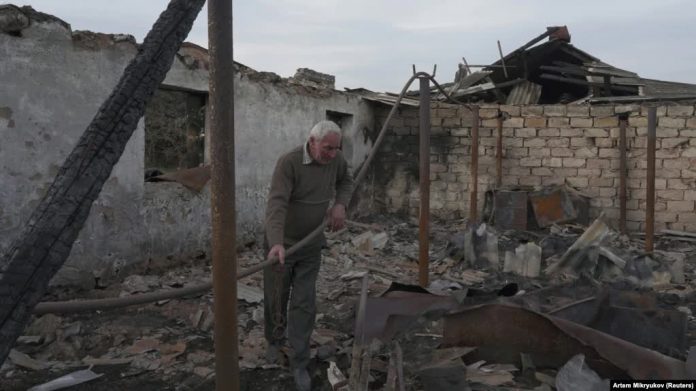 Elmira is the only woman who stays overnight in her neighborhood in the southern part of Nagorno-Karabakh.

When a Russian-brokered cease-fire brought an end to fighting between Azerbaijan and Armenian forces over the territory in November 2020, advancing Azerbaijani troops had gotten as far as her apple orchard. Now her backyard is cut in half by the new “line of contact” established under the truce.

Soldiers from each side have dug trenches across her orchard within 40 meters of each other. An Azerbaijani flag flies on the hilltop overlooking her home.

At night, with her house in the village of Taghavard surrounded by the opposing forces, she can hear both sides talking as they dig their trenches deeper and reinforce their defensive fortifications.

“Sometimes I go to bed in my clothes — just in case something happens and I need to run away,” Elmira recently told the International Crisis Group (ICG), an independent NGO that seeks to prevent and resolve deadly conflicts.

In a June 9 report on Nagorno-Karabakh’s postwar prospects, the ICG tells Elmira’s story to help illustrate the current situation on the breakaway Azerbaijani region’s front lines seven months after the November 9 cease-fire came into effect.

ICG researchers say Elmira fled Taghavard last autumn along with all the other ethnic Armenian civilians who lived in the village to escape the advancing Azerbaijani forces. Only about half of Taghavard’s residents have returned since then due to fears for their safety and the destruction of half the houses in the village.

Baku has not yet allowed the return of any Azerbaijani civilians displaced from the area by the war in the early 1990s.

Other ethnic Armenian women come to Elmira’s neighborhood in the daytime because a school is still operating there. But there are only half as many students as before.

“Residents feel least safe along the new front’s southernmost sections,” the ICG says. “This area saw fierce fighting, and while in many places missiles and drones did most of the damage, here, soldiers and volunteers squared off, guns in hand, within firing range of civilians.”

Elmira has no running water. The water pipes that supplied her neighborhood were severed by missile strikes during Azerbaijan’s six-week military offensive. Repairing them would require ethnic Armenian workers to cross through the defensive lines into Azerbaijani-controlled territory — something the Azerbaijani side won’t allow.

Meanwhile, with the exception of the International Committee of the Red Cross, international aid groups are unable to deliver assistance in Nagorno-Karabakh until politicians in Yerevan and Baku resolve the issue at the heart of their conflict since the early 1990s — the final political status of the breakaway region.

“Along parts of the front line that extend into mountain villages, Armenians have different worries” than those of Elmira, the ICG says. “They are unlikely to be in the line of fire, but some have been briefly detained by Azerbaijanis when they have accidentally wandered over the line of contact, which is not yet clearly demarcated in these areas.”

The report says “a handful” of ethnic Armenian civilians have been detained by Azerbaijani soldiers while they were on their way to tend orchards or cattle in pastures, having “no reason to think they had left Armenian-controlled territory.”

“The soldiers released them all within hours after family members or neighbors raised the alarm with de facto authorities and Russian peacekeepers,” the report says. One senior Azerbaijani official told the ICG that “the detentions were errors” and the “door should remain open to any unarmed Armenian.”

Citing reports by RFE/RL, the ICG says the “fragility” of the cease-fire has already been highlighted by tensions that “flared in mid-May as Armenia and Azerbaijan disputed new positions established by Azerbaijani forces” close to their shared border.

With Russia as the main foreign mediator between Armenia and Azerbaijan, the ICG says Moscow’s influence and the Russian peacekeeping mission “helps settle many problems, but not all of them.”

“Skirmishing in May 2021 at the Armenia-Azerbaijan state border was a stark illustration of the need for diplomatic engagement on immediate postconflict issues” the group says. “The escalation came despite Russian-proposed talks to demarcate the border and following shuttle diplomacy by Russian Foreign Minister Sergei Lavrov between the two capitals,” it says.

Meanwhile, “despite plans to complete technical discussions” by March 1 on resuming joint use of regional transport routes, the ICG notes that “talks have deadlocked — leading to heated statements threatening renewed fighting in southern Armenia, where a road important to Azerbaijan is located.”

The ICG concludes that mass displacements from Nagorno-Karabakh, the scramble by military forces to build up new frontline positions, and a looming humanitarian crisis all add up to a “fragile situation” in and around the region.

“Already frictions along the new front line, which lies close to civilian settlements, threaten renewed violence,” it says. “The longer it takes for Nagorno-Karabakh residents to return home and resume some semblance of normal life, the harder it will be to jump-start future peace efforts.”

The ICG makes three key recommendations about what needs to be done to improve the postwar prospects for Nagorno-Karabakh.

Perhaps most crucially, it says Russian peacekeepers that were deployed hastily under the terms of the cease-fire must be given “a clear mandate for their long-term deployment.”

It says both sides should build on the kind of “ad hoc contacts” that have already been used to resolve urgent problems — such as the arrests of unarmed civilians.

The need for getting more aid into conflict-affected areas is critical, the ICG says. “Talks on Nagorno-Karabakh’s political status are nowhere in sight.”

ICG researchers say neither the de facto ethnic Armenian authorities nor the government in Yerevan have the necessary resources to deal with Nagorno-Karabakh’s postwar chaos alone — “risking a protracted humanitarian crisis and long-term displacement of people.”

They note that Russia has offered to help with the disbursement of assistance “when outside agencies gain access.”

Until then, the ICG says international organizations “should find creative solutions to allow minimal support at least to their local counterparts on the ground.”

Deployed with vague orders under the cease-fire deal, Russian peacekeepers have taken positions where Azerbaijani and Armenian troops now face off against each other.

They also are positioned along the so-called Lachin corridor that cuts through Azerbaijan’s Lachin district and serves as the main artery between Armenia and Nagorno-Karabakh.

The ICG notes that 11 of the 27 outposts for Russian peacekeepers across the conflict zone are along the 8-kilometer Lachin corridor. “At these posts, Russian personnel check identity documents and inspect all passing vehicles,” the ICG says. “No soldiers and no weapons except those belonging to the peacekeepers themselves are permitted on this route.”

Russian troops also are posted about 20 kilometers from Nagorno-Karabakh’s new front lines at a joint Russian-Turkish monitoring center set up in February near the village of Qiyamedinli in Azerbaijani- controlled territory.

“The center is currently staffed by 47 Russian and 45 Turkish military personnel, though, according to an Azerbaijani official, those numbers could increase by up to 60 people per country,” the ICG report says.

“Drones deployed daily by the center observe the situation along the front line,” it says. When there is a violation of the cease-fire, “Russian staff are responsible for immediately notifying the Armenian and Azerbaijani defense ministries while Turkish staff inform only the Azerbaijani side.”

None of the reports from the Russian-Turkish monitoring center has been made public.

The ICG concludes that the new front lines in Nagorno-Karabakh are “more volatile than before” fighting broke out last autumn — leaving Russian peacekeepers with “their hands full” since they arrived.

The June 9 report documents how Russian peacekeepers have “done everything from escorting villagers to visit graves or tend crops to fixing water pipes.” It says they’ve also helped mediate “disputes over mundane matters from access to water to stray cows, without a clear mandate for how to handle tensions along the front.”

“How long they can keep acting as troubleshooters of everyday problems is unclear,” the ICG says. “How they would react to a front-line escalation is murkier still, given that the cease-fire agreement did not spell out their mission precisely.”

It advises Russia to consult with the warring parties and then provide its troops with “clear rules of engagement.” “The parties themselves should devise, potentially with Russian mediation, a formal mechanism for resolving urgent issues — be it residents’ detention or access to water,” the report says.

ICG experts say nobody doubts that the Azerbaijani military has a “clear advantage along the new front,” with an overwhelming number of troops positioned on high ground. But the researchers note that “Armenian forces have not yet created outposts on all the heights available to them,” adding that “they could yet gain strength by doing so.”

“To date, they have worked instead to reinforce the immediate front line to prevent Azerbaijan from taking more territory.”

ICG experts say the topography of the new front lines also presents some logistical problems for Azerbaijan. They note that despite their strategic positions, Azerbaijani soldiers in the Kalbacar district and in the town of Susa — known in Armenian as Shushi — are “disconnected from the rest of the country.”

“Several times a week, they have to use roads that run through Armenian settlements,” the ICG says. “Russian peacekeepers serve as escorts on the condition that the trucks transport only construction materials and food, no weapons.”

“Azerbaijan is now building a new road to [Susa/Shushi] and considering another route via the [Mrav/Murovdag] mountains to Kalbacar,” it says. “But road works in the steep, windy mountain terrain will take time, and some in Baku worry the finished route might be suitable for light vehicles only or be frequently blocked by snow.”

The ICG concludes that both local and international actors must address Nagorno-Karabakh’s postwar issues of “security, basic needs, and displacement” soon.

It says failure to do so means the breakaway region is likely to remain an area of tension for decades to come.

“Such strain will weigh not only on relations between Armenia and Azerbaijan, but also on the South Caucasus as a whole, including plans as part of the cease-fire to rebuild interrupted trade and infrastructure links in the region,” the researchers warn.