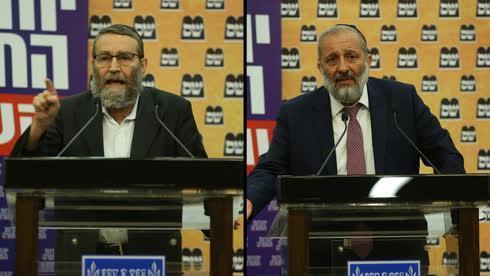 Opinion: What could have pushed Gafni, Litzman and Deri to launch a vicious attack on the likely next prime minister of the State Israel, himself an observant Jew? After all, thus is not the first time in recent history that they have found themselves cut off from the government teat

United Torah Judaism leaders Moshe Gafni and Yaakov Litzman held a dramatic press conference on Tuesday. Joining them was the head of the Shas party Aryeh Deri, who declared with tear-filled eyes that the end of Israel as a Jewish state is nigh.

It was quite the show and must have left the voters of both Shas and United Torah Judaism looking at their politicians in bewilderment.

Whatever could cause these seasoned politicians to come down with such an acute anxiety attack?

The answer is politics.

The three most prominent Haredi politicians gathered to condemn the formation of the “government of change” that will next week unseat Prime Minister Benjamin Netanyahu after 12 years. The Haredi parties will not be part of it.

The statements and accusations they directed at Prime Minister-designate Naftali Bennett were especially harsh, even by Haredi standards.

“He should take off his kippa,” Litzman said of Bennett. “This is not the separation of religion and state – this is the removal of religion from the state,” Deri added.

“The name of the wicked shall rot,” Gafni continued, referring to Bennett. “This government will desecrate the holy Shabbat. No education, no Torah, no purity of lineage,” he continued.

As for what the purity of lineage actually means, an extensive search of Jewish sources and authorities failed to yield a proper answer.

Eventually it became clear that “purity of lineage” is a reference by ultra-Orthodox rabbis to the possibility that non-Haredi rabbis would carry out conversions or marry people who are not recognized as Jewish by Haredi law.

In other words, those heading the ultra-Orthodox community are afraid that this new government will lead to a decrease in the number of Haredi Jews.

It is important to note that the coalition agreements and guidelines of the new government have no clause that threatens the status quo in matters of religion in Israel.

The concern of the leaders of the two ultra-Orthodox parties is understandable. Being in opposition purdah naturally keep them from the government teat.

While the funds for the Haredi yeshivas will continue to flow as before, the parties’ control over the day-to-day functioning of the Finance Ministry, the Religious Affairs Ministry, the local authorities via the interior and housing ministries and the prime minister will all disappear or be greatly diminished.

Yisrael Beytenu head Avigdor Lieberman, a fierce opponent of the Haredi parties, will be the next finance minister and will also control the Knesset Finance Committee.

Needless to say, this is a source of great disconcertment for them. But while it may explain their anxiety, it doesn’t explain the madness.

These coalitions did not send them into such a mad downward spiral, so why now?

Perhaps because this time, the Haredi absence from the coalition is the fault of Deri, Gafni and Litzman themselves.

Bennett, New Hope head Gideon Saar and New Hope MK Zeev Elkin begged them to join the government. But they vehemently refused, believing Netanyahu when he told them that had he defectors from the new coalition in his pocket, and that the new government would never happen.

And thus, on the eve of the new government’s inauguration, Gafni, Deri and Litzman owe their voters an explanation. Instead of admitting they were wrong to trust Netanyahu, they are accusing the new government of being anti-religious, anti-Jewish, and just plain evil.

Another explanation is that they were afraid of Sharon and Netanyahu, while they see Bennett – with his paltry six seats – as easy pickings.

Perhaps they fear the numerous looming investigations, including the probe into the tragedy at a Lag B’Omer event on Mount Meron that was approved by Deri and at which 45 people died. To say nothing of the detention of two of Litzman’s closest aides for suspected corruption.

“The impudence of the parties who serve to advance the hatred of Judaism knows no bounds,” said Rabbi David Stav, the head of the Tzohar organization that aims to bridge the gaps between religious and secular Jews.

“Those who do not trust the Chief Rabbinate on any matter suddenly think they are its defenders,” he said.

“It is time for the representatives of the Jewish faith to promote a love of the Torah in Israeli society and not use it as a tool for their own political aspirations.”