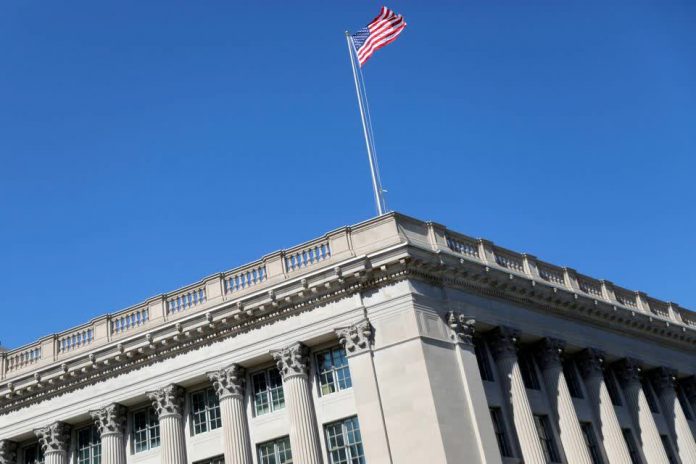 The United States Chamber of Commerce building is seen in Washington, D.C., U.S., May 10, 2021. REUTERS/Andrew Kelly

The U.S. Chamber of Commerce on Wednesday urged the United States and European Union to quickly resolve their disputes over steel and aluminum tariffs and aircraft subsidies, and adopt a new privacy shield to better coordinate digital policy.

The largest U.S. business lobbying group mapped out its recommendations in a four-page memorandum sent to U.S. officials as President Joe Biden began his first trip abroad, an eight-day mission to rebuild trans-Atlantic ties strained during the Trump era and to reframe relations with Russia.

U.S. and EU officials are expected to launch a new trade and technology council during the summit that will set compatible standards and facilitate trade in fields such as artificial intelligence and data flows, according to U.S. and EU sources.

In its memo, which was seen by Reuters, the Chamber said Biden’s June 15 summit with EU leaders was the right occasion to launch such a platform and align on clear shared priorities.

Closer cooperation would allow the two sides to craft more coordinated and effective responses to “countries that do not respect global trade rules and norms and pose significant threats to our security and values,” an apparent reference to Russia and China.

U.S. and EU officials will commit to ending the nearly 17-year dispute over subsidies to aircraft makers Airbus SE (AIR.PA) and Boeing Co (BA.N) before July 11, while setting a Dec. 1 deadline to end punitive tariffs related to a steel and aluminum trade dispute, according to a draft communique.

The Chamber said both sides should also agree to a new U.S.-EU privacy shield to facilitate better coordination on digital policies, a vital step needed to “give companies the legal certainty they need when transferring data across the Atlantic.”

The two sides should also agree to a “first, do no harm” principle on new regulations and new preferential trade agreements with third countries, the Chamber said.

It said the new council should have twice-yearly meetings at the senior level, with a formal mechanism to allow for structured business input.

The goal, it said, should be to strengthen bilateral relations, boost competitiveness and innovation, and meaningfully address shared concerns with third countries.