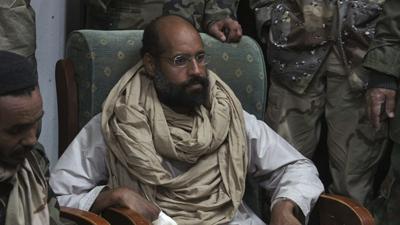 The son of former Libyan leader Muammar Gaddafi is reportedly eyeing his country’s highest office a decade after his father was overthrown and murdered by NATO-backed rebels, triggering years of civil unrest.

Saif al-Islam Gaddafi has begun to reach out to Western and other diplomats as he seeks to re-enter public life, the Times reported. Once viewed as his father’s successor, he is preparing to stand in Libya’s December 24 presidential contest. Speaking to the paper via telephone, he said he was in good health, and confirmed his relationship with a team of advisers acting on his behalf. Gaddafi is expected to publicly announce his political ambitions in the near future. However, it is still unclear whether he will be allowed to run, as a new election law currently being drafted could potentially exclude him from participating.

The 48-year-old was captured and imprisoned by militants in 2011. He was freed by his captors six years later under an amnesty agreement. Since then, he has remained in hiding. He still faces an arrest warrant in Libya, and, according to the Times, is also wanted by the International Criminal Court (ICC). Several of his siblings remain in prison either in Libya and abroad.

Sources who spoke with the Times said the ICC warrant could be withdrawn, but that Gaddafi would likely run for office even if it were not. The paper speculated that US Secretary of State Antony Blinken, who was a vocal proponent of the NATO campaign in Libya, would likely oppose the idea of Gaddafi’s son running for office.

Saif al-Islam Gaddafi made headlines in 2018, after Bloomberg reported that Russian diplomats had spoken to him via a video link shortly after he was released from prison. A family spokesperson said around that time that Gaddafi wanted to run for president.

Moscow responded to the Bloomberg report by stating that no one should be excluded from Libya’s political process, adding that it kept in touch with various groups in the country in an effort to help facilitate peace negotiations. Libya has seen years of civil war and political turbulence following the NATO-backed intervention. It is inching towards a settlement between the Tripoli-based Government of National Accord and a separate governing body supported by military commander Khalifa Haftar, which controls the country’s east.

Both the GNA and the Haftar-backed administration have agreed to back a central government. In March, Libya’s parliament appointed Prime Minister Abdul Hamid Dbeibeh to lead an interim government until December’s election.