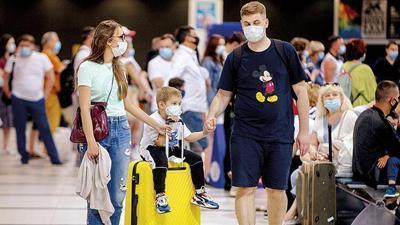 Russian holidaymakers are looking forward to traveling to Turkey as authorities from both sides intensify negotiations on resuming flights that have been suspended due to rising coronavirus cases in Turkey, according to tourism professionals and officials.

Russia banned its citizens from flying to Turkey in mid-April despite the fact that tens of thousands of them had already booked rooms at Turkish accommodation facilities. Later, Russian authorities extended the ban to June 21, saying that daily coronavirus cases in Turkey were not declining fast enough.

Both holidaymakers and travel operators are hoping that flights will resume on July 1 at the latest, said Yuri Barzykin, the deputy head of the Russian Union of Travel Industry (RST), on June 9.

“There are two important and objective reasons for Russian authorities to resume charter flights to Turkey at the beginning of July,” he was quoted as saying by TASS at a press conference.

“First, Turkey’s success in its fight against the pandemic. The number of cases in the last week is below the criteria defined by the World Health Organization and Russia,” he added.

“The second important reason is that more than 500,000 people are waiting to take tours they have bought through travel agencies. This brings a huge financial liability,” he said.

Barzykin said in April that most of their customers delayed their holidays after the flight ban instead of canceling bookings. He also warned that Russian companies stand to lose around 5 billion rubles ($65 million) due to the air traffic halt.

“We hope to be compensated for these losses. We also expect the government to initiate a subsidy program for airlines and tour operators,” he said.

Dmitriy Gorin, the vice president of the Association of Tour Operators in Russia (ATOR), also complained that they were still not notified by Russian authorities about the timing of the resumption of air travel between the two countries.

“We expect the decision on Turkey to be announced by June 13, well before the June 21 deadline. It should be considered that scheduling flights to Turkey by airline companies could take two weeks,” he said.

The Turkish Health Ministry confirmed 6,454 new coronavirus cases, including 558 symptomatic patients, across the country on June 9, down nearly 90 percent from the peak of April.

Turkey is a major destination for Russian holidaymakers. In 2020, Turkey welcomed more than 2.1 million Russian tourists, who accounted for some 17 percent of all foreign tourist arrivals last year, according to the Turkish Culture and Tourism Ministry’s data.

Turkey’s tourism income stood at $2.4 billion in the first quarter of this year.

Russia and Turkey stressed the importance of resuming full-scale air traffic between the two countries, the Russian Foreign Ministry said on June 9.

At a meeting in Moscow on June 8, at the level of the deputy foreign ministers, the representatives of the two countries agreed to lift restrictions with the improvement of the coronavirus situation, the ministry said in a statement on its official website.

The Turkish side was represented by Deputy Foreign Minister Sedat Önal, while the Russian side by his counterparts Sergey Vershinin, Andrey Rudenko and Alexander Vershinin.

Amid the global coronavirus outbreak, Turkey has set an example with the measures it has taken in the field of tourism. The Tourism Promotion and Development Agency (TGA) said the safe tourism certificates have been granted to a total of 5,216 accommodation facilities. In addition, 10,457 facilities, including 2,035 restaurants and cafes, 2,836 tour and transfer vehicles, 21 culture and congress centers, 327 marine tourism sightseeing boats and similar vehicles and 10 theme parks, have received the certificates.

“There is very serious demand for holidaying to our country, both from Russia, our biggest market, and from Europe,” Nadir Alpaslan, the deputy minister of culture and tourism, said on June 9.