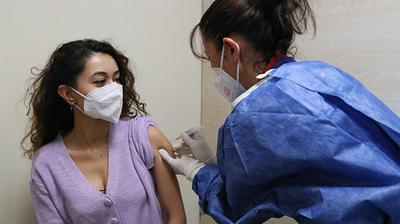 Turkey has added new group of professionals, including people working in the eatery sector, drivers, lawyers and barbers, to its vaccination program that has been gaining momentum lately.

This week citizens aged 45 and older already started receiving their COVID-19 injections, while the vaccinations of people over the age of 40 will begin early next week.

“As part of our inoculation program, employees of the food production and distribution sector, cafes and restaurants, as well as barbers and hairdressers can make a vaccine appointment as of Friday,” Health Minister Fahrettin Koca announced on Twitter on June 10.

All lawyers, regardless of age, have also been included in the vaccine priority program, the minister said.

The minister also announced on June 11 that those working in intracity and intercity transport as well as taxi drivers will be able to make vaccine appointments starting June 12.

He also urged the public to not skip their appointment. “A single BioNTech vial contains vaccines for six people. When it is diluted it should be used within six hours otherwise it goes to waste. The vaccine is precious, and it is not easy to supply. Do not skip your appointment,” Koca wrote on Twitter.

Turkey rolled out its vaccination drive in mid-January, starting with health care staff and the elderly. Over the months, the jab drive has widened to cover new age groups and key professionals, such as teachers, academics, musicians and people working in the cinema and TV industry.

The government is hoping to accelerate the vaccination drive further during the summer months as it expects more deliveries of the Pfizer/BioNTech and the Sinovac jabs at a time when the daily number of COVID-19 cases has been declining sharply in the wake of the partial lockdown, which was in place from April 29 to May 17.

At the start of June, the country moved to what the government dubbed the “gradual normalization” phase, shortening curfew hours and partially reopening restaurants and cafes.

Earlier this week, Koca said if more vaccines are delivered in the weeks ahead, people as young as 20 could started to be inoculated by the end of June.

To date, Turkey has administered nearly 32.5 million doses of coronavirus. This figure suggests that some 22 percent of the population have received at least one dose of the COVID-19 vaccine.

According to data from the Health Ministry, around 19 million citizens have been given the first dose of the jab while more than 13.5 million people have been fully vaccinated.