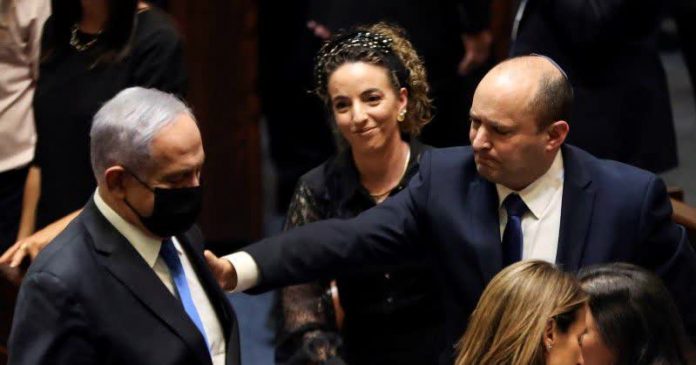 He said his government “will work for the sake of all the people”, adding that the priorities would be reforms in education, health and cutting red tape.

The right-wing nationalist will lead an unprecedented coalition of parties backed by MPs in Sunday’s 60-59 vote.

He succeeds Benjamin Netanyahu who was forced out of office after 12 years.

Mr Bennett, leader of Yamina party, will be prime minister until September 2023 as part of a power-sharing deal.

He will then hand power over to Yair Lapid, head of the centrist Yesh Atid, for a further two years.

Mr Netanyahu – Israel’s longest-serving prime minister – will remain head of the right-wing Likud party and become leader of the opposition.

During Sunday’s debate in the Knesset (parliament) in Jerusalem, a defiant Mr Netanyahu promised: “We’ll be back.”

After lawmakers voted in the new coalition government, Mr Netanyahu walked over to Mr Bennett and shook his hand.

In his speech, Mr Bennett, 49, said: “This is not a day of mourning. There is a change of government in a democracy. That’s it.

“We will do all we can so that no-one should have to feel afraid… And I say to those who intend to celebrate tonight, don’t dance on the pain of others. We are not enemies; we are one people.”

Representatives of the Palestinians have reacted dismissively to Israel’s new government.

“This is an internal Israeli affair. Our position has always been clear, what we want is a Palestinian state on the 1967 borders with Jerusalem as its capital,” a spokesman for Palestinian President Mahmoud Abbas said.

“It is an occupation and a colonial entity, which we should resist by force to get our rights back,” said a spokesman for Hamas, the Islamist group that controls Gaza.

US President Joe Biden sent his congratulations to Mr Bennett, saying he looked forward to strengthening the “close and enduring” bilateral relationship.

After the confidence vote was announced, Benjamin Netanyahu went and sat back in the prime minister’s chair in the Knesset chamber.

He had to be ushered to the opposition benches instead.

It was a moment of political history – Mr Netanyahu literally unseated as Israel’s longest serving leader.

He’s not going anywhere, for now at least. He’ll stay in that opposition chair and try to unpick, pull apart and otherwise “overthrow” – as he puts it – the coalition of the first new prime minister in 12 years.

This government is Israel’s broadest ever – but that could also make it the most unstable. Naftali Bennett will have his work cut out just holding the parties together.

Why has this happened?

He called an election in April 2019 but failed to win enough support to form a new coalition government. Two more inconclusive elections followed.

After the third, he formed a government of national unity with then-opposition leader Benny Gantz, but the deal collapsed and Israel went back to the polls in March.

Likud emerged as the largest party, but after Mr Netanyahu was again unable to form a government, the task passed to Mr Lapid, whose party came second.

Opposition to Mr Netanyahu staying in power had grown, not just among the left and centre but also among right-wing parties that are ordinarily ideologically aligned to Likud, including Yamina.

Although Yamina came joint fifth in the election with only seven seats, its support was critical. After weeks of negotiations, Mr Lapid brought Yamina on board as part of a constellation of parties whose only common goal was to remove Mr Netanyahu from office.

The agreement involving eight factions with the 61 seats required for a majority was signed on 2 June, just half an hour before a deadline was due to expire, effectively sealing Mr Netanyahu’s fate.

In appearance, Mr Bennett’s government will be unlike any which has preceded it in Israel’s 73-year history.

The alliance contains parties which have vast ideological differences, and perhaps most significantly includes the first independent Arab party to be part of a potential ruling coalition, Raam. It is also expected to have a record number of nine female ministers.

The inclusion of Raam and left-wing non-Arab Israeli parties means there could be friction on issues such as Israeli policies towards Palestinians – Yamina and another right-wing party, New Hope, are staunch supporters of Jewish settlement in the Israeli-occupied West Bank, for instance.

There could also be difficulties over social policies – while some parties want to advance gay rights, such as recognising same-sex marriages, Raam, an Islamist party, is against this.

In addition, some parties want to relax religious restrictions more extensively than Yamina – a national-religious party – will likely allow.