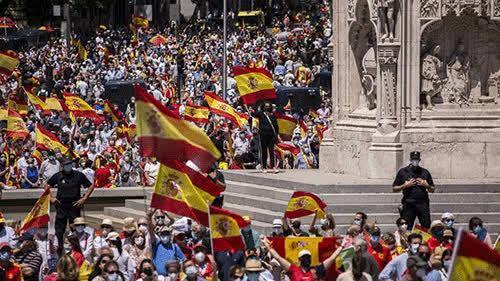 Tens of thousands of people have joined protests in the Spanish capital Madrid against controversial plans to pardon jailed Catalan separatists.

Leaders of Spain’s right-wing parties joined the demonstration against the pardoning of 12 separatists behind a failed independence attempt in 2017.

Protesters accuse the Socialist-led Spanish government of using the plan to shore up its political support.

But the government says the pardons will help calm tensions over Catalonia.

The semi-autonomous region’s drive for independence plunged Spain into its biggest political crisis in 40 years in 2017.

The demonstrators see the pardons as a threat to national unity. Many waved red and yellow national flags as they gathered in Colón Square in central Madrid.

“We should stop this now because for a pardon you must show contrition, and the separatists will not show that,” one protester, Carlos Bandecha, told the Reuters news agency.

But Spanish Prime Minister Pedro Sánchez has defended the move as a way to bring Catalans and Spaniards closer together.

“Spanish society needs to move from a bad past to a better future – and that will require magnanimity,” Mr Sánchez said earlier this week.

Around 61% of Spaniards do not agree with the pardons, while 29.5% back them, according to a recent poll for the Spanish newspaper El Mundo.

Spain’s Deputy Prime Minister Carmen Calvo has indicated that the pardons are “close”.

But the country’s Supreme Court said in a non-binding report last month that it opposes potential government pardons for the Catalan separatist leaders.