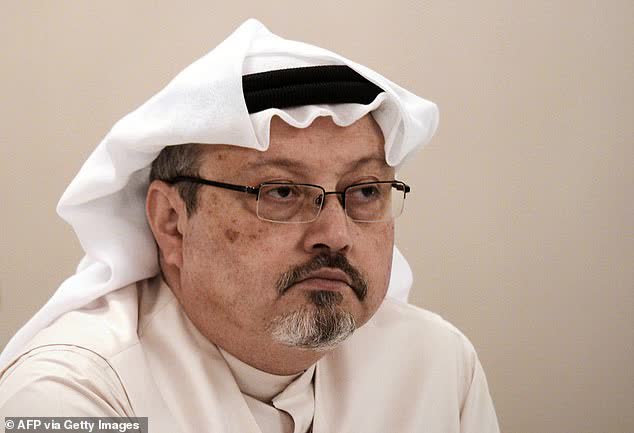 A team of Saudi assassins flew to Cairo to collect ‘illegal’ drugs used to kill journalist Jamal Khashoggi (above in 2014) from their alleged Egyptian accomplices, evidence suggests

The Washington Post columnist was killed at the Saudi consulate in Istanbul in October 2018, in a case that tarnished the reputation of de facto ruler Crown Prince Mohammed bin Salman.

It has now emerged that on the morning of his death, a private Gulfstream jet carrying a team of Saudis made a stopover in Cairo on its way to Istanbul, Yahoo! News reports.

According to notes taken by Turkish Embassy officials who sat in on a private trial of the suspects, the men stopped in Egypt to pick up a dose of narcotics that later killed Khashoggi.

It is unclear what the drugs contained or who provided them at Cairo International Airport in the early hours of October 2, 2018.

Khashoggi was killed and dismembered, allegedly with a bone saw, inside the consulate in Istanbul later that day.

He first visited the building to obtain a Saudi document stating that he was divorced so he could marry his Turkish fiancée, Hatice Cengiz, on September 28, 2018.

But Khashoggi – a royal family insider turned critic – was told he would have to return to pick up the document on October 2.

He was last seen on CCTV entering the building at 1:14pm.

His body was dismembered and removed from the building, with investigators later concluding Khashoggi was restrained and injected with a large amount of drugs.

Saudi Arabia’s deputy public prosecutor Shalaan al-Shalaan said in November 2018 that the murder was ordered by the head of a ‘negotiations team’ sent to Istanbul to bring Khashoggi back to the kingdom ‘by means of persuasion’ or ‘force.’

The alleged stopover in Cairo could suggest the group dispatched by Mohammed bin Salman had intended to kill the journalist before leaving Riyadh for Istanbul.

Saudi Arabia has denied this, instead claiming he was killed in a ‘rogue operation’ by a so-called ‘Tiger Team’ who were sent to persuade him to return to Saudi Arabia.

A flight tracking app shows the Gulfstream private jet took off from Riyadh on October 1 and made a stop in Cairo before landing in Istanbul at 3.30am.

According to Yahoo! News, US intelligence officials have previously refused to comment on whether the CIA knew about this Cairo connection.

Richard Clarke, who serves as chair of think tank the Middle East Institute, said the ‘most likely’ explanation for the stopover is that Egyptian spies provided the drugs later used to kill Khashoggi.

He said: There’s a hell of a lot of Saudi government money that goes into propping up [the Egyptian government].

According to notes taken by Turkish Embassy officials who sat in on a private trial of the suspects, the plane (above) in Egypt to pick up a dose of narcotics that later killed Khashoggi

‘And you can get a lot in return for that money. I don’t think they had to reveal the target. Just like, “Hey, you’ve got this stuff in your inventory. We ran out. Can we stop by and get a few sticks of butter?”

‘I think that the answer for the Egyptians, that’s a no-brainer.’

The lengthy Turkish notes, which detail the secretive legal proceedings in the capital Riyadh, were recently entered into the court record in Istanbul.

They claim the 15-member hit squad considered burying the journalist’s body in the consulate garden but ‘gave up on the idea’ because they feared they could be caught.

It was instead allegedly dismembered and carried away on a private plane.

According to the notes, Khashoggi’s body was then deposited in black plastic bags that were loaded into the back of a Mercedes sedan.

It is understood they were then burned in an outdoor tandoor oven.

The murder of Khashoggi caused a global uproar, tarnishing Mohammed bin Salman’s image. Some Western governments, as well as the CIA, said they believed he had ordered the killing.

Saudi officials say he had no role, though in September 2019 MbS indicated some personal accountability, saying ‘it happened under my watch’.

Out of 11 individuals indicted in the case – most of whom remain unnamed – five were sentenced to death, three face jail terms totaling 24 years and the others were acquitted, according to the public prosecutor.

Khashoggi was hacked to pieces at the Saudi consulate in Istanbul in 2018. The CIA said it believed Crown Prince Mohammed bin Salman ordered his killing following critical pieces written by Khashoggi about the Saudi regime.

Riyadh has described the murder as a ‘rogue’ operation, but both the CIA and a United Nations special envoy have directly linked Prince Mohammed to the killing, a charge the kingdom vehemently denies.

The suspects were put on trial in secretive proceedings condemned by the United Nations and rights groups.

U.N. special rapporteur for extrajudicial summary or arbitrary executions, Agnes Callamard, accused Saudi Arabia of making a ‘mockery’ of justice by allowing the masterminds of the 2018 killing to go free.

However, the victim’s son Salah Khashoggi said of the verdict that ‘it has been fair to us and that justice has been achieved.’

Saudi prosecutors had said deputy intelligence chief Ahmed al-Assiri oversaw Khashoggi’s killing and the US Treasury had claimed the royal court’s media czar Saud al-Qahtani was ‘part of the planning and execution’ of the operation that led to the murder.

Qahtani was investigated but not indicted ‘due to insufficient evidence’ and Assiri was charged, but eventually acquitted on the same grounds, according to the public prosecutor.

Both aides were part of Prince Mohammed’s tight-knit inner circle and were formally sacked over the killing, but only Assiri appeared in the court hearings, according to Western sources.