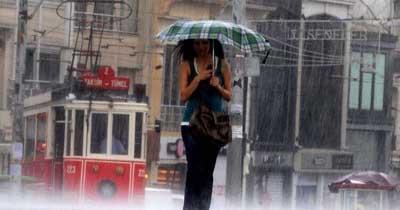 The Turkish State Meteorological Service has declared a yellow warning for 22 provinces, including Istanbul and Ankara, for heavy rains expected this week while calling on people to take precautions.

An orange warning, which means “dangerous situation,” was also declared for several Central Black Sea provinces, including Bolu, Zonguldak, Bartın, Karabük, Düzce and Kastamonu, as indicated on the warning map shared by the service.

Authorities warned people to be cautious against adversities such as sudden floods, lightning, hail, strong winds and transportation disruptions during expected showers.

According to reports, showers are expected to continue intermittently until early June 19 and will be effective in the districts on the central and the Asian side of Istanbul, a metropolis with a population of 16 million people.