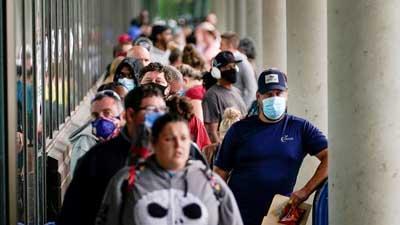 Andy Slavitt, a former pandemic adviser for President Joe Biden, said Americans did not sacrifice enough throughout the Covid crisis and could have done more to save lives, stoking outrage among viewers after months of lockdowns.

Appearing on CBS to promote his new book after stepping down from the senior adviser role last week, Slavitt dispensed advice on how Covid-19 could have been handled better, offering criticism not only of the previous administration, but of the American people at large.

“We all need to look at one another and ask ourselves what we need to do better next time, and in many respects being able to sacrifice a little bit for one another to get through this and save more lives is going to be essential and that’s something that I think we all could have done better on,” Slavitt told ‘CBS This Morning’ on Monday.

While the ex-adviser also pointed to “technical mistakes” early on in the pandemic, including issues with testing and protective gear, he stressed that “political leadership mistakes” led directly to the loss of life, pinning blame on the Donald Trump administration.

“We denied the virus for too long under the Trump White House. There was too much squashing of dissent and playing on divisions,” he said.

The comments were not received well by many online observers, with some critics noting the immense sacrifices made by workers, families and business owners during prolonged shutdowns and other pandemic restrictions in many states.

Some 22.2 million American jobs were wiped out during a pandemic- and lockdown- induced recession last spring, forcing many to rely on government assistance. A survey conducted last year by the US Chamber of Commerce and MetLife, meanwhile, showed that roughly 43% of small business owners feared they would have to close their doors for good short of a sudden infusion of cash. As of April, around 200,000 US businesses had been shuttered permanently due to the pandemic, a Federal Reserve study found.

Other detractors asked what Slavitt had given up during the pandemic, some accusing him of attempting to “profit” from the virus with his upcoming book, ‘Preventable,’ which is billed as the “definitive, behind-the-scenes look at the US coronavirus crisis.”

“Thx Andy Slavitt. Brave of you to quit your job at the [White House] to do promo for your book so you can profit off of Covid by wagging your fingers at us,” one user said. “We should have made our kids sacrifice more?”

While Slavitt did not specify what additional sacrifices the country could have made during his CBS appearance, he has previously outlined the policies he would have preferred. In a July 2020 Twitter thread, he called for a strict nationwide lockdown, including a full closure of the US border, a complete ban on all interstate travel and the shuttering of all bars, restaurants and churches.

“Instead of 50% lockdown (which is what we did in March in April), let’s say it’s a 90% lockdown,” he said at the time, claiming “we can virtually eliminate the virus any time we decide to.”

The death toll from the pandemic in the US crossed the 600,000 milestone on Monday, according to the data compiled by Reuters.