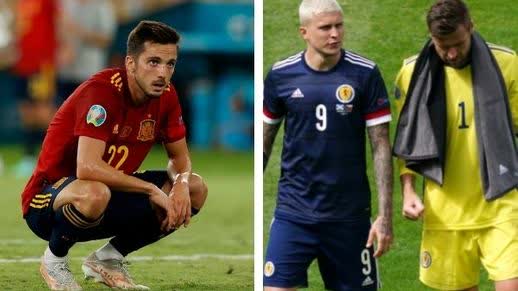 Spain and Scotland both suffered disappointing results in their opening Euro 2020 games.

A round-up of Monday’s action at Euro 2020 as Scotland begin with defeat to the Czech Republic, Slovakia shock 10-man Poland and Spain are held by stubborn Sweden.

On-loan Juventus hitman Morata wasted one fine opening in each half, as Luis Enrique’s Spain opened their tournament in frustrating fashion.

The three-time European champions dominated the Swedes but still had to ride their luck en route to an opening Group E point.

Marcus Berg wasted the opportunity of the match for Sweden, skying the ball high and wide from just yards out with the goal at his mercy.

And Alexander Isak could easily have seen his deflected effort ricochet into the goal rather than off the post and straight into Spain goalkeeper Unai Simon’s arms.

Former Chelsea striker Morata scythed wide with the goal at his mercy in the first half after Marcus Danielson’s error and hooked another opening wide after the break before Gerard Moreno headed straight at Robin Olsen in stoppage time.

In front of 9,847 fans – most of them Scots – both sides had chances in their opening Euro 2020 fixture before striker Patrik Schick headed the Czechs in front three minutes before the interval.

Schick doubled that lead in the 52nd minute with a sensational effort from just over the halfway line which beat keeper David Marshall.

After the pre-tournament hype, it was a dispiriting anti-climax for the Scots, who could not get control of the game albeit they passed up several opportunities.

Steve Clarke’s men will immediately start preparing for the trip to Wembley to play England on Friday night before their final group game against Croatia next week, but already their task looks ominous.

Marshall made a good save from Schick’s 14-yard drive after midfielder John McGinn lost possession at the edge of his own box.

But in the 31st minute Ryan Christie got on the end of a loose ball and set up the unmarked Andy Robertson on the left, only for his rising drive from 20 yards to be tipped over the bar by keeper Tomas Vaclik.

Scotland would soon pay for that miss as the Czechs forced three consecutive corners of their own before Schick rose above defenders Grant Hanley and Liam Cooper to head in a cross from Vladimir Coufal.

After the break, Marshall made good saves from Schick and Vladimir Darida but Scotland fought back and defender Jack Hendry clipped the top of the bar from 20 yards before Vaclik had to claw away a wayward clearance from his own defender Tomas Kalas that was goal-bound.

Then, as the Scots kept up the pressure, they found themselves two down from a Czech break when Schick beat the backtracking Marshall with a remarkable shot from just inside Scotland’s half.

Scotland rallied once more but Vaclik made two key saves from Lyndon Dykes which prevented Clarke’s side getting a lifeline, while Stuart Armstrong’s deflected shot ended up on the top of the net.

The Inter Milan defender netted after 69 minutes soon after Poland midfielder Grzegorz Krychowiak had been sent off for a second bookable offence in a tight Group E contest.

Prior to that dismissal, Poland had been in the ascendancy after Karol Linetty cancelled out a first-half Slovakia strike that was credited as a Wojciech Szczesny own goal.

Slovakia enjoyed the better of the first half and they went ahead after 18 minutes when Juventus goalkeeper Szczesny got the final touch after a clever run and strike on to the post from Robert Mak.