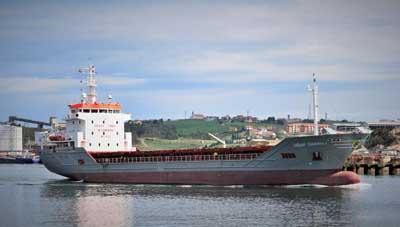 A Turkish-owned container ship, which rescued irregular migrants stranded in a flooded inflatable boat in the Mediterranean Sea, has been caught in the middle of both an international diplomatic crisis and a mutiny.

Ümit Gürpınar, the Turkish captain of a container ship named Uğur Dadaylı, changed the ship’s course after the request of search and rescue authorities while passing through the Maltese territorial waters on June 12.

Responding positively to the call for help, Gürpınar rescued 97 irregular migrants – including Libya, Syria, Bangladesh and Pakistan nationals – who were stranded in an inflatable boat in the middle of the Mediterranean Sea.

However, a diplomatic tension between the three countries that lasted for 12 hours occurred following the rescue operation when Tunisian and Maltese authorities refused to accept the irregular migrants that were on board.

Upon the increasing threat by the irregular migrants who said that they would raise a riot on the ship with sharp objects that they have, the migrants were landed in Malta after the pressure from the Turkish Foreign Ministry.

Hakan Çendik, the vice president of the Coaster Shipowners and Operators Association, emphasized that humanitarian aid turned into a problem due to Malta’s rejection.

“Maltese and Tunisian authorities have clearly stated that they do not want refugees. The threats by refugees on board posed a great danger in the open sea. With the determined attitude of the Turkish Ministry, the ship entered a port in Malta,” Çendik said, adding that the International Maritime Organization should clarify such refugee emergencies as soon as possible.

Hüseyin Ozanlı, Dadaylılar Maritime Fleet Manager, said that Malta’s refusal to accept refugees despite its call caused a security problem on board.

“Our ship was able to go to Malta when the security problem created by the refugees was understood through the initiatives of the ministry,” Ozanlı said.