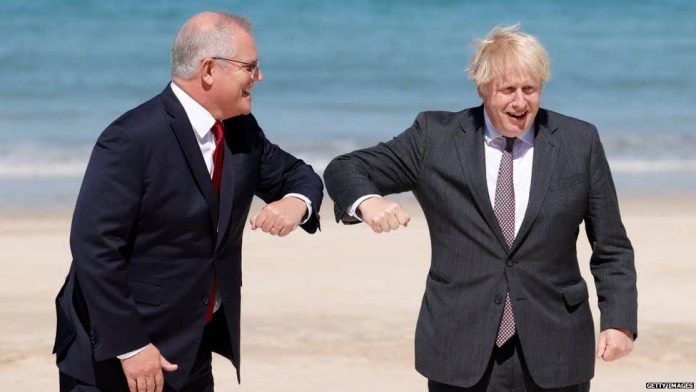 The broad terms of a trade deal between the UK and Australia have been agreed, the BBC understands, with a formal announcement expected on Tuesday.

This is the first trade deal to be negotiated from scratch since the UK left the EU.

It is seen as an important step towards the UK joining a wider Asia Pacific free-trade agreement.

The UK government has signed a long list of trade deals over the past year, but they have been rollovers of those the UK already had as part of the EU.

The new trade deal is expected to give UK and Australian food producers and other businesses easier access to each other’s markets – an ambition perhaps alluded to by the meal served up to the pair on Monday evening – Welsh lamb and Scottish smoked salmon, washed down with Australian wine.

The UK government says membership of the Comprehensive and Progressive Agreement for Trans-Pacific Partnership (CPTPP) could provide British farmers with huge opportunities.

However, there have been concerns in the farming community about the UK compromising on its food standards, as well as tensions in government between the Environment Secretary, George Eustice, and the Trade Secretary, Liz Truss.

UK farmers also have concerns there will be no meaningful safeguards in place to stop farmers being undercut by cheap imports.

Farmers in Australia are allowed to use some hormone growth promoters, pesticides, and feed additives that are banned in the UK.

According to the National Farmers Union (NFU), Australian farmers are able to produce beef at a lower cost of production, and could undercut farmers in the UK.

Scotland had raised worries about the farming industry being overwhelmed if the market was flooded with lower standard goods.

With the two leaders in the same room, sitting at the same dinner table, the UK trade agreement with Australia is now tangible. Both prime ministers can draw on the significance of striking the first deal after the UK has left the EU.

Australian farmers have essentially been locked out of the UK market for almost 50 years – finding it nearly impossible to navigate Brussels’ restrictions, tariffs and quotas. The president of the Australian National Farmers’ Federation said it had been very difficult to break into the UK because it was “way too expensive and way too far”.

But with tariffs and quotas likely to be removed within 15 years – a detail expected in the agreement – it opens up a much-coveted area for the Australian agricultural industry.

On any given day this would be huge news, but it’s even more significant now as Aussie farmers look to diversify due to the increased tensions between Canberra and Beijing. In the past year, China has slapped tariffs and restrictions on everything from Australian beef, barley and wine, to rock lobster and coal.

UK farmers have big concerns. They see the potential importation of cheap Australian produce at lower standards on an industrial scale as a real threat to their livelihoods. They’ve been assured that safeguards will be in place but we have yet to hear what these are exactly.

This deal sets the tone as the world watches closely to see what a post-Brexit British economy looks like in action. How free it really is. How it’s changed. More crucially, what compromises it’s willing to make to open up new markets.

The Department for International Trade has previously said any deal with Australia would include protections for the agriculture industry and not compromise the UK’s high standards.

Trade Secretary Liz Truss defended plans for a deal with Australia last month, telling MPs: “We will make sure in all the deals we do that British farming thrives.”