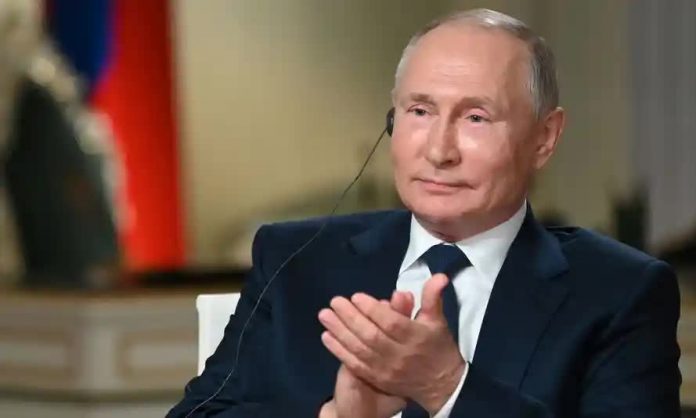 In US TV interview, Russian leader deflects allegations over cyber-attacks and human rights

The Guardian-Julian Borger in Washington

Vladimir Putin has refused to give any guarantee that the opposition leader Alexei Navalny will get out of prison alive, saying his continued detention was not his decision and noting the poor state of medical care in Russian jails.

Navalny was the victim of poisoning with the Russian-made nerve agent novichok and then jailed for more than two years. He faces further prosecution, suggesting the Kremlin is ready to extend his jail term. His political movement was outlawed last week as part of a wider suppression of opposition groups.

Asked whether he could guarantee that Navalny would be released alive, Putin replied: “Look, such decisions in this country are not made by the president. They’re made by the court whether or not to set somebody free.

“As far as the health, all individuals who are in prison, that is something that the administration of the specific prison or penitentiary establishment is responsible for. And there are medical facilities in penitentiaries that are perhaps not in the best condition. And they are the ones whose responsibility it is.”

Putin maintained his longstanding avoidance of saying Navalny’s name, referring to him as “that person”. He said he hoped the jail medical service would do its job “properly” but added: “To be honest I have not visited such places for a long time.”

Asked to response to Putin’s remarks on Monday night, Biden told reporters: “Navalny’s death would be another indication that Russia has little or no intention of abiding by fundamental human rights.”

Asked about the suppression of opposition groups, Putin claimed they were being banned as “foreign agents”, the routine designation of dissidents in Russia, and that “harsher” laws had been in place in the US for decades. It was an apparent reference to the Foreign Agents Registration Act (Fara) of 1938, which requires lobbyists to register with the Treasury if they are doing paid work for a foreign government, person or entity. It is not used to prosecute opposition activists.

As for Navalny’s poisoning and the assassination of other opposition figures and dissidents, Putin said: “We don’t have this kind of habit, of assassinating anybody.”

Attempting to turn the tables on his American interviewer, he went on to describe the shooting of Ashli Babbitt, one of the rioters who stormed the US Capitol on 6 January, as an assassination.

“Did you order the assassination of the woman who walked into the Congress and who was shot and killed by a policeman?” Putin said. Babbitt was shot by a police officer as she was climbing through a door to the Speaker’s Lobby, which had been smashed by the rioters who had stormed the building.

More than 500 people have been charged for their role in the January insurrection, which was aimed at reversing the result of the presidential election two months earlier and maintaining Donald Trump in the presidency.

Putin sought to portray them as political prisoners. “They came to the Congress with political demands. Isn’t that persecution for political opinions?” he asked.

“You’ve asked me a question,” the Russian president replied. “You are not liking my answer, so you’re interrupting me. This is inappropriate.

“We have a saying: ‘Don’t be mad at the mirror if you are ugly,’” Putin continued. “It has nothing to do with you personally. But if somebody blames us for something, what I say is: why don’t you look at yourselves? You will see yourselves in the mirror, not us. There is nothing unusual about it.”

Putin said he was prepared to discuss a prisoner swap with Biden, exchanging Americans being held in Russia for Russians in US jails.

In particular, Putin mentioned Konstantin Yaroshenko, a Russian pilot arrested in May 2010 in Liberia on charges of conspiracy to smuggle drugs, and handed over to the Drugs Enforcement Administration, which flew him to the US for trial. The Russian government claimed Yaroshenko was kidnapped.

Biden will be raising the cases of two Americans imprisoned in Russia – the former US Marine Trevor Reed and Paul Whelan, a Michigan corporate executive.

Reed is serving a nine-year sentence on a charge of hitting a Russian police officer, a charge described by the US ambassador in Moscow as “flimsy”. Putin, without evidence, denounced Reed as a “troublemaker” and a “drunk”.

Whelan, also an ex-Marine, was arrested at his hotel on New Year’s Eve in 2018 when he was getting dressed for a friend’s wedding. He was convicted of spying after a short trial conducted entirely behind closed doors, and sentenced to 16 years in prison. No evidence against him was made public and US officials believe he was arrested as a bargaining counter for an eventual prisoner swap.

Whelan’s family released an audiotape on Monday of the prisoner appealing to Biden to secure his release when he meets Putin, and “bring this appalling case of hostage diplomacy to an end.”

“I remain innocent. No crime of espionage occurred,” Whelan said in the recording. “The secret trial, without evidence, proves those facts. The abduction of an American tourist cannot stand. Congress, American citizens and supporters throughout the world echo my call for immediate, decisive action.”