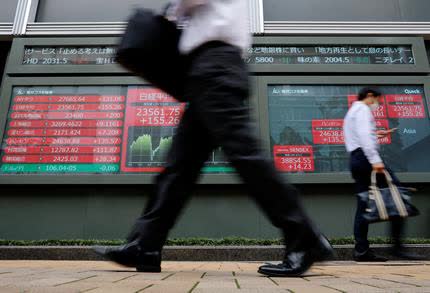 Passersby wearing protective masks walk past an electronic board showing Japan’s Nikkei average, the exchange rate between Japanese yen against the U.S. dollar and other world’s benchmarks outside a brokerage, amid the coronavirus disease (COVID-19) outbreak, in Tokyo, Japan September 14, 2020. REUTERS/Issei Kato/File photo

SYDNEY, June 16 (Reuters) – Asian shares were subdued on Wednesday with investors wary of any hint of hawkishness from the U.S. Federal Reserve given lofty asset valuations rely so heavily on an endless supply of super-cheap money.

A looming data dump on Chinese retail sales and industrial production offered another reason for caution, with some modest slowdown in annual growth expected.

Moves were modest, except in the oil market where prices hit the highest since April 2019 on a potent mix of post-pandemic demand and restricted production.

Both S&P 500 futures and Nasdaq futures were all but unchanged. EUROSTOXX 50 futures rose 0.1% and FTSE futures 0.3%.

For dealers, discretion was the better part of valour ahead of the conclusion of the Fed’s two-day meeting later in the session. read more

Trading could be choppy around the event as forecasts from Fed members might read as hawkish, while the news conference from Fed Chair Jerome Powell has tended to sound dovish.

“We think Chair Powell will indicate officials discussed talking about tapering, but tapering itself is still someway off given the Fed remains well short on making substantial progress on employment with payrolls still 7.3 million below pre-pandemic levels,” said NAB economics director Tapas Strickland.

Key will be Fed members’ projections, or dot plots, for interest rates and whether more now tip a hike in 2023. Previously only 7 out of 18 had seen such a move.

There could also be some upward movement in inflation projections for this year and next, given the last two readings on consumer prices surprised to the high side.

BofA’s latest survey of fund managers suggests most are sanguine on the outlook. Some 72% said inflation was transitory, while only 23% saw it as permanent.

“Investors are bullishly positioned for permanent growth, transitory inflation and a peaceful Fed taper via longs in commodities, cyclicals and financials,” said BofA, suggesting the market was vulnerable to any hint of Fed hawkishness.

The bond market certainly seemed untroubled with 10-year Treasury yields holding at 1.50%, just above a recent four-month low of 1.428%.

The Fed’s dogged dovishness has kept the dollar generally restrained, though it did eke out a one-month top overnight against a basket of currencies. The dollar index was last at 90.519 and going nowhere for now.

Oil prices continued their bullish run to hit their highest in more than two years amid signs of stronger demand and still tight supplies.