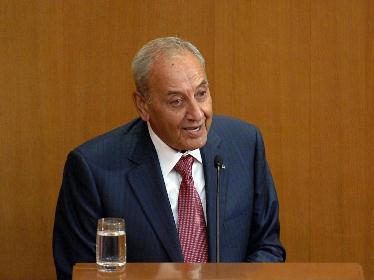 Parliament Speaker Nabih Berri on Wednesday lashed out at the Presidency, after it accused him of interfering in the cabinet formation process.

“The decision to designate a premier does not stem from the will of the president but rather comes from the decision of the MPs, or the legislative authority,” Berri said in a statement.

“The person who carries out the parliamentary consultations to form the government is the PM-designate, according to Article 64 of the constitution, and accordingly I have the right, based on the PM-designate’s request, to try to help him in any initiative that he might find,” the Speaker added.

Reminding that PM-designate Saad Hariri had agreed to increasing the number of ministers to 24 and to the solution reached for the interior portfolio, Berri said President Michel Aoun complicated things anew by “insisting on 8+2 ministers to be named by the president, who is constitutionally not entitled to even a single minister.”

“In your statement yesterday, you openly said that you don’t want Saad Hariri as premier. This is not your right, the decision of his designation did not come from you, and parliament voiced a resounding stance in its response to your letter,” the Speaker added.

“A solution is needed… and the initiative will continue,” Berri went on to say.