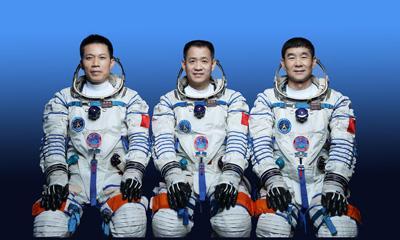 Update: China Manned Space Agency briefed on Wednesday that Shenzhou-12 manned spacecraft will be launched via the Long March-2F carrier rocket on Thursday at 9:22 am, sending three astronauts into space for China’s Space Station construction.

As China’s launch of the Shenzhou-12 crewed mission set to ferry three Chinese astronauts to the Tianhe space station core cabin draws near, Global Times learned from the China Manned Space Agency on Wednesday that the crew are composed of two veteran astronauts and a new face.

Nie will board the Shenzhou-12 manned spacecraft for his third flight, following his first during the Shenzhou-6 mission in October 2005 and second flight of Shenzhou-10 in June 2013. He was given the title of “hero astronaut” after its second space mission, according to the webstie of the China Manned Space Engineering Office (CMSEO.)

Liu will join Nie in the upcoming mission after his first trip to space in September 2008 during the Shenzhou-7 spaceship mission, for which he was given the honorary title of “hero astronaut,” CMSEO website shows.

The third crew member, Tang Hongbo, 46, was selected from the second batch of astronauts in 2011. He will make his debut flight in space during the Shenzhou-12 mission, scheduled to be launched in June.

The team will stay in China’s space station for three months, during which they will engage in repair and maintenance, appliance switching and the scientific operation of payloads.

China selected its first batch of 14 astronauts in the mid-1990s. Since 2003, it has sent six astronauts into space, including Yang Liwei, the country’s first astronaut, and Zhai Zhigang, who carried out China’s first space walk in September 2008.

In 2011, China selected its second batch of astronauts, made up of five men and two women, the first time women were selected as astronauts in China’s space mission.

Although there will not be any female astronauts in the forthcoming  mission, they could participate in future missions, Yang, who is also the director of CMSEO previouslym said.