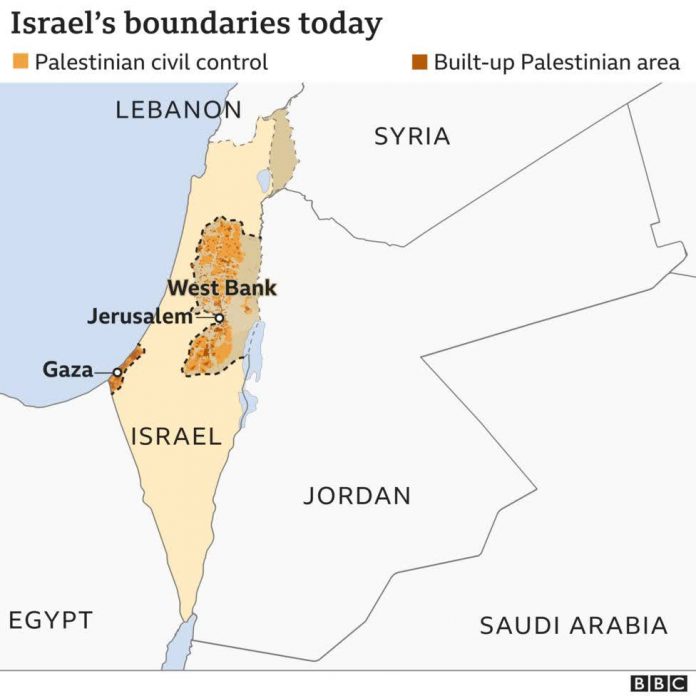 https://www.bbc.com-Israel says it has launched air strikes against Hamas targets in the Gaza Strip, in retaliation for incendiary balloons fired from the territory.

Explosions were heard in Gaza City in the early hours of Wednesday.

Several balloons were sent from Gaza into Israel earlier on Tuesday causing multiple fires, according to the Israeli fire service.

It is the first major flare-up since 11 days of fighting between the two sides ended in a ceasefire on 21 May.

It followed a march by Jewish nationalists in occupied East Jerusalem on Tuesday, which had drawn threats from Hamas, the militant group that runs Gaza.

What do we know about the attacks?

In a statement, the Israel Defense Forces (IDF) said its fighter jets had hit military compounds operated by Hamas in Khan Yunis and Gaza City.

It said “terrorist activity” took place in the compound, and that the IDF was “prepared for all scenarios, including the resumption of hostilities, in the face of continued terror acts from the Gaza Strip”.

It is not immediately clear if the air strikes have caused any injuries.

A Hamas spokesman said in a statement on Twitter that Palestinians would continue to pursue their “brave resistance and defend their rights and sacred sites” in Jerusalem.

Israel’s fire service said the incendiary balloons launched earlier from Gaza had caused at least 20 fires in fields by communities in southern Israel.

This is the first violent exchange since Israeli’s new coalition government came to power last weekend, headed by Naftali Bennett and drawing an end to Benjamin Netanyahu’s 12-year run as prime minister.

A reminder of a fragile ceasefire

The recent air raids lasted for only 10 minutes, but they were enough to remind the city’s residents, who are trying to recover from the aftermath of the recent fighting, that the ceasefire is fragile.

It is not only the sounds of explosions that remind people of the war here. You only have to drive your car or walk in the city’s streets to witness the scale of destruction that has befallen the city. Tons of rubble still block the main streets in the heart of Gaza.

A local street vendor, Abu Muhammad, sells nuts on a small cart in the Rimal neighbourhood, which was subjected to the largest strikes in the previous round of violence. He told me: “We can no longer tolerate more wars, the coronavirus pandemic stopped our work for many months, and the last war caused a great loss, I could no longer feed my six children.”

A neighbour, who lives near a Hamas military site that was hit in the latest strikes, told me by phone it was scary watching new plumes of smoke rising.

What happened at the Jerusalem march?

More than 30 Palestinian protesters were injured and 17 people arrested on Tuesday as Israeli police cleared areas of East Jerusalem for the march, firing stun grenades and rubber bullets.

Video on social media shows some Israeli demonstrators chanting “death to the Arabs” at local Palestinians.

The Jerusalem Day flag march is an annual event that marks Israel’s capture of East Jerusalem – home to the Old City and its holy sites – in the 1967 Middle East War.

This year’s event had been due to take place last Thursday, but organisers cancelled it after Israeli police rejected the proposed route, citing security concerns.

It was later approved by Israel’s coalition government, but Foreign Minister Yair Lapid criticised the Israeli participants who sang racist and violent songs.

“The fact that there are extremists for whom the Israeli flag represents hate and racism is abominable and intolerable,” said Mr Lapid. “It is incomprehensible how one can hold an Israeli flag in one’s hand and shout ‘death to Arabs’ at the same time.”

What has caused recent tensions?

Fighting between Israel and Palestinian militants in Gaza began on 10 May after weeks of rising tension in East Jerusalem, which culminated in clashes at al-Aqsa, a holy site revered by both Muslims and Jews. Hamas demanded Israel remove police from there and the nearby predominantly Arab district of Sheikh Jarrah, where Palestinian families face eviction by Jewish settlers.

The Israeli military says more than 4,300 rockets were fired towards its territory by militants and that it struck more than 1,000 militant targets in Gaza.

A ceasefire was later brokered by Egypt and other countries, and came into effect on 21 May.

At least 243 people, including more than 100 women and children, were killed in Gaza during the conflict, according to Gaza’s health ministry. Israel has said it killed at least 225 Palestinian militants.

In Israel, 12 people, including two children, were killed, its medical service says.